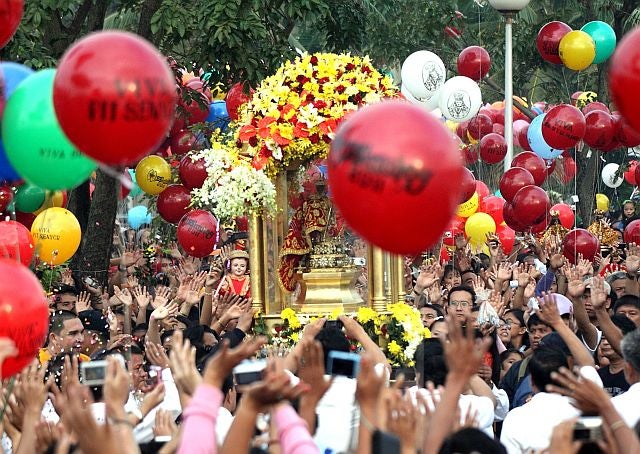 Bringing of balloons in any of the Sinulog activities is being discouraged by the Augustinian fathers just like this which was taken during the fluvial parade in 2011. (CDN FILE PHOTO)

The Augustinian fathers made an appeal to those who will be participating in this year’s Sinulog celebrations to stop the practice of releasing balloons, with prayers written on slips tied to the tails.

The 452nd Fiesta Señor celebration is set to begin on Thursday, January 5 and people have a practice of releasing balloons, with prayers written on slips tied to the tails.

However, the Augustinian fathers are discouraging this saying it is harmful to the environmental and may cause power interruptions.

“I request everyone to stop bringing balloons at the basilica as well as during the solemn processions because these materials are hazards to the environment,” said Fr. Aladdin Luzon who heads the committee on security of the Fiesta Señor.

In 2014, the Augustinian fathers at the Basilica del Sto. Niño prohibited the sale of balloons at the church compound during the Fiesta Señor celebration in response to the call of environment advocates who said balloons that end up in the sea are eaten by marine animals like whales and dolphins, who mistake them for food.

The synthetic material ends up in their stomachs undigested, causing the animals’ death.

Also, balloons released into the air can cause power interruptions, Alladin said.

In 2013, a power transformer exploded along M.J. Cuenco Avenue in Cebu City when it was hit by a flying balloon during the solemn procession. It caused a temporary power outage.

The Fiesta Senor 2014 officially starts on Thursday, Janaury 5, with the annual “Walk with Jesus”, a penitential foot procession from Fuente Osmeña to the basilica at 4:30 a.m.

The theme for this year’s feast is “Santo Niño: Source of Communion, Protector of Creation” which is patterned to the pastoral thrust of the Catholic Bishops’ Conference of the Philippines on the Year of the Parish, and Pope Francis’ encyclical Laudato Si on the care of the environment.

“As you see, the image of the Sto. Niño holds the world in his hands. He protects everything in the world. Let us also do our share to save creation. If we threaten the environment, it will also threaten us,” said Fr. Pacifico Nohara, OSA, the rector of the centuries-old church.

For several years, the release of balloons in the air during the feast of the Sto. Niño has been a popular gesture of lifting prayers to heaven.

The Augustinian fathers, the caretakers of the basilica and the image of the child Jesus, want the practice to stop, teaching devotees the proper way of expressing their faith.