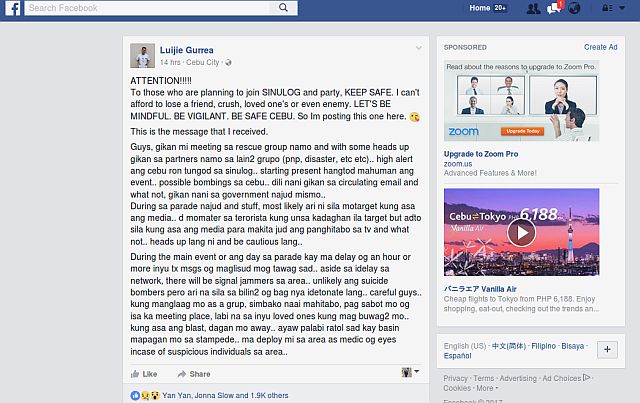 A screenshot of Luijie Gurrea’s post which he already took down as of 2 p.m.

NETIZENS were urged not to spread bomb threats and terror attacks for the duration of the Sinulog.

The Cebu City Disaster Risk Reduction and Management Office (CCDRRMO) made the public appeal in response to a Facebook post by a certain Luijie Gurrea which went viral.

“I understand his concerns. His tips are valid. But it is not the official statement of the government particularly the Cebu City DRRMO,” said CCDRRMO head Nagiel Bañacia.

Banacia said official announcements or advisories should only come from law enforcement authorities like the police and the military. Still, he said being careful is still advised during the activities.

“Let’s be vigilant, stay safe, enjoy the Sinulog in deep faith that Sto. Niño will keep us from any harm,” Bañacia said.

In his post, he said, “ATTENTION!!!!! To those who are planning to join SINULOG and party, KEEP SAFE. I can’t afford to lose a friend, crush, loved one’s or even enemy. LET’S BE MINDFUL. BE VIGILANT. BE SAFE CEBU. So Im posting this one here.”

(Guys, we just attended a meeting of our rescue group and with some heads up from our partners like the PNP, disaster..Cebu is on high alert now because of Sinulog…it’s from now until Sinulog ends..there are possible bombings in Cebu. This is not from an email but from the government.)

(It will happen during the grand parade, most likely targeting the media. The terrorists are not looking at the number of victims but are targeting the media to make sure it will be documented and aired live on TV. This is just a headsup and be cautious) 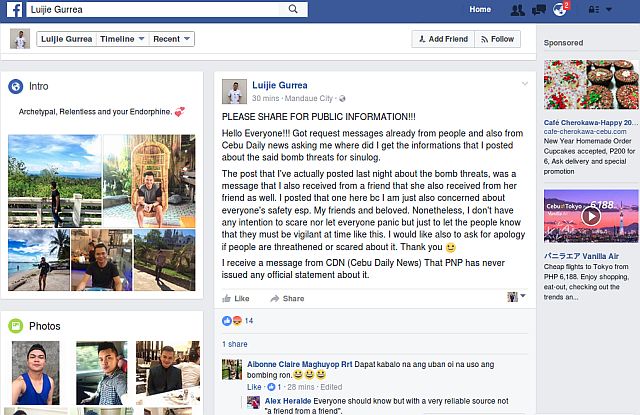 After taking down his post about possible bombings in Cebu during Sinulog, Luijie Gurrea posted this on his wall.

Cebu Daily News reached Gurrea through Facebook chat and he replied that his post was a message that he received from a friend.

“I posted that one here becaue I am just also concerned about everyone’s safety especially my friends and beloved. Nonetheless, I don’t have any intention to scare but just to let the people know that they must be vigilant at time like this. Thank you.”

When asked where his friend received the information, Gurrea said the message was also received by his friend.

Read Next
Over 100K drug users nabbed, killed in 7 months