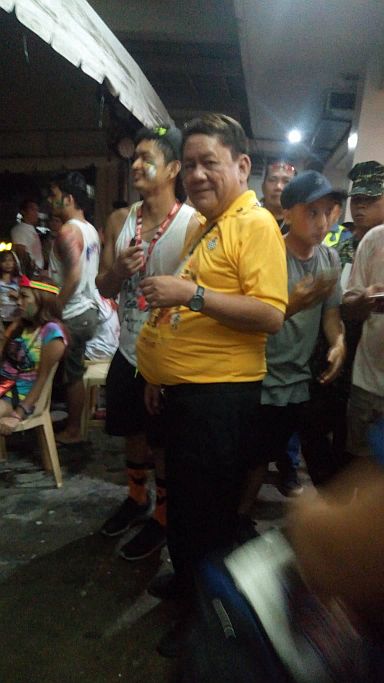 CEBU CITY—Cebu City Mayor Tomas Osmeña went to Juana Osmeña Street about 6:40 p.m. on Sunday after receiving reports that revelers attending a party hosted by a local radio station were getting rowdy.

The music immediately stopped when the mayor arrived at 6:41 p.m. and talked to the crowd to tell them that they could continue as long as they would not disturb other people.

“Basta wai samok (As long as there’s no trouble), no problem. They have to maintain crowd control. Mao na akong gi putol ang sound system. Ayaw lang i-disturbo ang uban, okay ra (That’s why I cut off their sound system. As long as they don’t disturb others, it’s ok),” said the mayor in his Facebook page.

He added they already augmented security in the area.

Osmeña earlier sent additional policemen to Juana Osmeña Street after getting reports that the crowd attending the party there was getting rowdy.

The party started about 3 p.m. near the corner of Juana Osmeña Street and Aboitiz Street.

Since it was conducted on a private property, the police merely monitored the peace and order situation in the area, said Senior Insp. Porferio Gabuya, sector head of the area covering Escario and J. Osmeña Streets up to the National Bookstore along General Maxilom Avenue where the bulk of the street parties were usually held.

“This is a fiesta. We will tolerate what makes the people happy, as long as there’s no trouble,” he added.

So far, he added, he had no received reports of violent incident during the Sinulog Grand Parade on Sunday.

They, however, had about four sacks of glass bottles confiscated from revelers who brought these while walking in the street, many reeking with alcohol.

Gabuya said that the 80-man overt security team covering the area had been augmented by 30 more police personnel as more people went to the streets.

As of 5 p.m., Gabuya said they had received reports of five lost cellular phones and recovered seven wallets that had been divested of valuables.###

Read Next
NEW HOME: Cebuana Rondina signs up with Petron