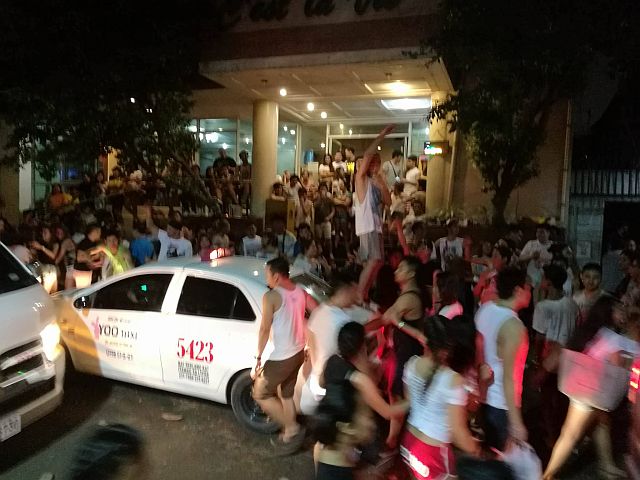 Crowds of drunken revelers, among them minors shouted and danced and stomped as if in a frenzy as the bangged and climbed on vehicles passing by Juana Osmeña and Aboitiz Streets. (CDN PHOTO/CHRISTIAN MANINGO)

Cebu City Mayor Tomas Osmeña called in the Marines to help secure Juana Osmeña Street on Sunday after receiving reports that revelers attending a party hosted by a local radio station were again getting too rowdy.

The streets near Baseline is the same area last year that revelers were so drunk. It resulted into a melee, with people banging on cars and destroying property. Several people were injured then.

The area has become notorious for wild Sinulog street partying after the grand parade.

But at about 6:41 p.m. yesterday, Osmeña arrived and ordered the music to be immediately stopped.

He then talked to the crowd to tell them that they could continue as long as they would not disturb other people.

“Basta wa’y samok (As long as there’s no trouble), no problem. They have to maintain crowd control. Mao na akong gi putol ang sound system. Ayaw lang i-disturbo ang uban, okay ra (That’s why I cut off their sound system. As long as they don’t disturb others, it’s ok),” said the mayor in his Facebook page.

He added they already augmented security in the area.

“We have (the) Marines with us,” he said. However, shortly after the mayor left, the soldiers also pulled out at around 7 p.m.

Earlier, Regional Police Office deputy director for operations Senior Supt. Lyndon Lawas sent additional policemen to Juana Osmeña Street after getting reports that a crowd of drunk party goers were amassed in the area, swishing beer and dirtying the faces of passersby with paint.

Many of the revelers appeared to be minors who continued to make noise using whistles while shouting and chanting to make up for the loss of the blaring music from the sound system that Osmeña had ordered cut off.

And as if in a frenzy, at past 9 p.m. last night, revelers were seen either banging or jumping atop the hood and trunk of passing vehicles.

The police stood by and watched passersby while manning traffic, in an exercise of maximum tolerance.

The party started about 3 p.m. near the corner of Juana Osmeña and Aboitiz Streets. Since it was conducted on private property, the police merely monitored the peace and order situation in the area, said Senior Insp. Porferio Gabuya, sector head of the area covering Escario and J. Osmeña Streets up to the National Bookstore along General Maxilom Avenue, where the bulk of the street parties are usually held.

“This is a fiesta. We will tolerate what makes the people happy, as long as there’s no trouble,” Gabuya said. So far, he said, he has not received reports of violent incidents during the Sinulog Grand Parade on Sunday.

The police, however, confiscated around four sacks of liquor bottles from revelers who brought these while walking in the streets, many of them reeking with alcohol. Gabuya said the 80-man overt security team covering the area had been augmented by 30 more police personnel as more people partied in the streets.

Sought for comment, Cebu City Police Office (CCPO) director Senior Supt. Joel Doria said that the crowd near Baseline and General Maxilom Avenue were “under control” despite the influx of party goers.

Mobile jails from the Bureau of Jail Management and Penology (BJMP) were on stand by in party areas, said Doria.

“Hinuhuli talaga namin yung unruly. Strikto talaga tayo sa mga unruly, (We really arrest those who are unruly. We are really strict when it comes to them),” said Doria belying media reports of chaos in streets along Juana Osmeña, although the scenes were caught on camera.