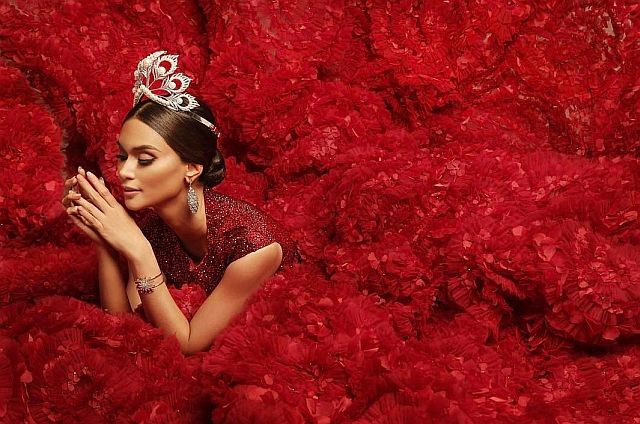 REIGNING queen Pia Wurtzbach is slaying everything that she does as Miss Universe, even up to the last days of her reign as she gets her hands busy with photo shoots, a few days before the grand coronation at the Mall of Asia Arena tomorrow.

On her Instagram, Pia shared a photo of her wearing a Michael Cinco gown as she gets to experience wearing the iconic Miss Universe crown created by jeweler Mikimoto.

“A dream come true,” was how Pia would describe the experience in wearing the iconic crown for the first time. K. Mikimoto & Co., Ltd. was the official jeweler of Miss Universe from 2002 to 2007.

Kokichi Mikimoto, the founder of Mikimoto, is considered as the first person who cultured pearls, as the company is also known in using mostly pearls and other precious stones for its exquisite designs.

Miss Universe 2002 Oxana Fedorova, was first to wear the crown but she later reliquinshed it to Panama’s Justine Pasek after Oxana was dethroned.

It was Japan’s Riyo Mori who last wore the Mikimoto crown in 2007 after winning the title.

The design of the crown was describe as a phoenix, which signifies power, status and beauty.

Pia has the most recent crown design made by Diamonds International Corporation. The crown is inspired by the Manhattan skyline and was first worn by Paulina Vega in 2014.

As Pia will be passing on her crown to her successor, Philippines’ bet Maxine Medina is doing her best to secure a back-to-back victory for the country.

This, as 26-year-old Maxine became one of the crowd favorites during the preliminaries. She wowed the audience as she did her signature happy twirl during the swimwear competition with her two piece and her green gown with fringe skirt during the long gown competition.

The Filipina also stood out as she rocked her national costume made by Rhett Eala with a Mindanawon-inspired costume with a crown priced more than P1 million.

In the meantime, fans and netizens are busy having the hashtags #Miss Universe #Philippines trend as these would mean votes for Maxine, increasing her chances to make it to the top 12. As of yesterday, she was leading the online votes (more than 29 million votes), followed closely by Miss Thailand Chalita Suansane and Miss Indonesia Kezia Warouw.

Will Maxine make it to the top 12? We will all find out tomorrow.