The secret life of Liezyl Margallo 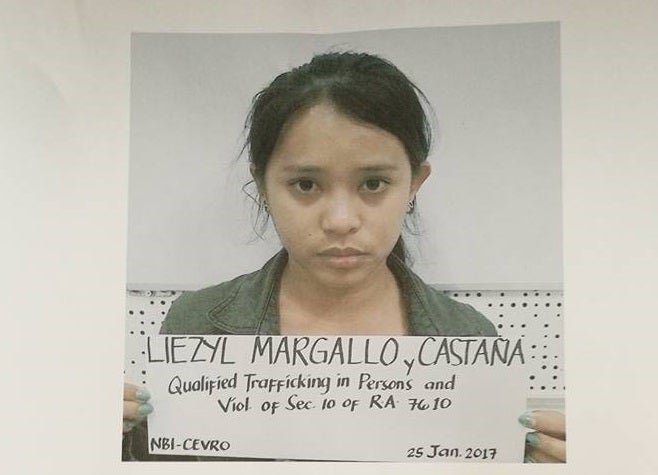 Suspected child trafficker, 23-year-old Liezyl Margallo was arrested, Wednesday on Malapascua Island, northern Cebu. The young lass was known to be kind, soft-spoken and generous to the people she befriended in Cebu. Little did they know that she kept a dark secret hidden in her past.

The 23-year-old woman, tagged as “savage” by the National Bureau of Investigation (NBI) for her alleged gruesome abuses against many children in Mindanao was “sweet and kind” when she lived the life of a fugitive for two years in Cebu until her arrest last week.

Liezyl Castaña-Margallo, who went by the aliases Shannon and Gina Carpio, was living the high life here as she partied in bars along Mango Avenue with new-found friends in Cebu; and foot the bill each time.

She offered them travels and had a passport under the name “Gina Carpio” to boot.

She lived in an expensive condominium unit in uptown Cebu and kept a membership in one of the city’s posh gyms.

She even did her share of charity work, donating to causes and orphanages.

A photo, provided by one of Margallo’s friends to CDN, showed the alleged child trafficker posing gleefully with friends as they were about to give out several packs of donation for World Food Day last October 16, 2016 through a Cebu-based charitable institution Margallo often donated to.

Among her friends, she was well-liked and popular and thought to be beautiful inside and out.
Cool and collect, she was on top of the world.

Until NBI agents swooped down on her strolling nonchalantly along the shores of Malapascua Island, northern Cebu while vacationing with two British nationals, Wednesday.

The arrest came three months after 16 arrest warrants were issued against her by the Cagayan de Oro court.

None of her friends, who are now trying to distance themselves from the horror of having once known her, could believe the news that sweet Shannon was in fact, a suspected sex predator who tortured children for years in Mindanao, as part of a lucrative cyberpornography business she run with her Australian boyfriend, arrested 53-year-old pedophile Peter Gerard Scully.

One of her gym buddies in Cebu City (name withheld) posted an appeal on Facebook for people to stop judging Margallo’s friends in Cebu, as they too are victims of a woman who lied to them exceptionally well.

An hour after making the appeal, the gym buddy deactivated her FB account, unable to take the stress of having to deal with a deluge of private messages from people judging her for her brief friendship with Margallo.

Who would have thought that Margallo was involved in crime since she even visited the less fortunate and went with her to church, said her gym buddy.

The woman explained that she met Margallo who introduced herself as “Shannon” in the gym.

“Didto me nag ka friends. Have no idea unsa og kinsa siya ug unsa ka yawa iyang gipang buhat (We met there and I had no idea what or who she was and the things that she did that were so evil),” the woman added.

“Even other members in the gym are in shock of what she has done and her true identity,” the woman said.

The woman also claimed that Margallo had walked in and out of the airport using a “fake identity.”

Margallo was said to own a passport in 2015 under the name Gina Carpio. Screenshot of the public Facebook page of “Shannon Carpio.”

Before deactivating her FB account, the woman decided to post on her wall some clarifications to address people’s questions.

“I don’t want to ignore anyone but please understand my situation. I’m in total shock with what happened. Me and my friends who knew her are still trying to figure out how we can wake up from the terror she brought to our lives,” she said.

The woman also apologized to her family for making friends with Margallo as she did not know her real identity and for introducing the suspected sex offender to her child.

She explained that she never left her child alone with Margallo, not even for an instance.

“Please undangi ko ug sige judge (stop judging me) because I’m the mother and my first instinct is to look after her and protect my child. One day you will know this when you’ll have your own kid, hopefully you’ll do better than me” she said.

“To my family who’s been crucifying me for making friends with her and knowing her … I’m sorry I have no idea of her true identity, her past doing whatsoever,” she added.

Another friend of Margallo also posted on her FB yesterday to stop telling them that they too were involved in whatever Margallo was into.

“Clearly all Cebu friends are victims here. We don’t have any idea about her monstrous past. She make us believe of another identity like Shannon Carpio is the first name given by her real mother as she was adopted by her current mom now which (sic) renamed her GINA CARPIO,” the woman said on the post.

Had they known of her past, the woman said, they would have been the ones to report Margallo to the NBI.

But in her secret life, she was a “sweet and caring friend” who turned out to be really “good at hiding and lying.”

“Understanding her past makes me angry, angry and disappointed. I really wish we never met her. If you people are the CEBU BLIND FRIENDS you won’t believe that you just had one FAKE FRIEND,” the woman added.

“She even joined feeding program to children here in Cebu, who would have thought that she’s a monster,” she said.

The woman continued on her post that to annoy Margallo’s friends in Cebu just adds insult to their injury.

“Its all in the web just google it don’t make our lives miserable,” she added.

Margallo’s gym instructor, Luis Lagunay did not notice anything strange about “Shannon” for about a month that they were together.

“Soft-spoken man to siya unya buotan man sad siya nako. (She was soft-spoken and was nice towards me),” said Lagunay who used to assist Margallo in the classy workout fitness center.

Lagunay taught Margallo the basics of working out sometime in 2016, several months after she began her secret life in Cebu.

Lagunay, like most of those contacted by Cebu Daily News, knew nothing of her dark past.

When he heard the news of her arrest for heinous crimes against young children, Lagunay was dumbfounded and could hardly believe it.

“Na-shock gyud ko. Di ko katuo nga mabuhat na niya. (I was really shocked. I could not believe that she was capable of doing those things),” Lagunay said.

He expressed hopes that the truth will come out and that justice will be served for the victims.

Margallo and Scully, conspired to lure female street children and young scavengers (aged 1-12) into their fold and turned them into sex slaves.

The children were all forced to perform appalling sexual acts and tortured. One of their victims was killed in the process.

Escorted by NBI-7 agents, Margallo was flown on Friday to Cagayan de Oro City where she will be facing the charges along with Scully who was arrested in Malaybalay, Bukidnon in February 2015.