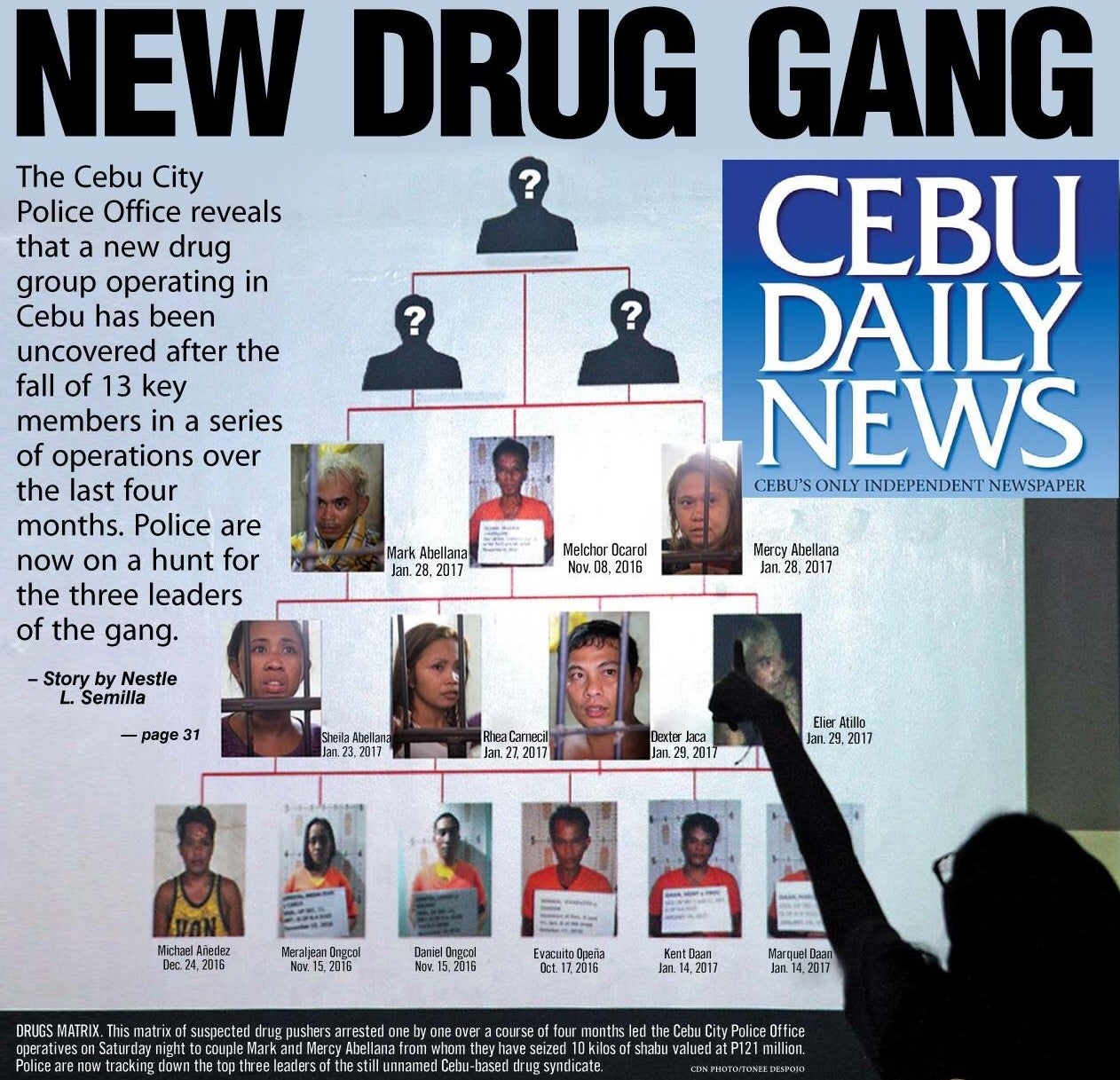 It was in October last year when police arrested Evacuito Opeña in a drug buy-bust operation in Barangay Suba, Cebu City.

But who would have thought that the operation that only yielded packs of shabu (methamphetamine) worth barely P1,000 would lead to a bigger drug haul in the future?

Moreover, the same arrest led to the discovery of a new drug gang that has filled the vacuum left by past drug lords of Cebu who have either been killed or jailed.

It was the biggest drug confiscation in Central Visayas since the intensified campaign against illegal drugs was launched under the Duterte administration.

Opeña was a key player in all of this, according to CCPO director Senior Supt. Joel Doria.

Doria said Opeña led them to Melchor Ocarol, a level three drug pusher, whose arrest made the police discover that they were actually confronted with a budding drug gang.

“Si Opeña yung unang nahuli sa grupo nila. Na tinuro si Ocarol. So from Ocarol, simula nang mahuli sila, nag-follow up tayo sa mga binanggit niyang pangalan which turn out to be positive. Nagsunod-sunod yung arrest (Opeña was arrested first in their group, who pointed us to Ocarol. After Ocarol was arrested, we did follow up operations, which turned out to be positive and led us to the series of arrest of their members),” Doria said.

Ocarol was arrested in November last year in a drug bust inside his residence in the coastal village of Pasil, Cebu City.
It was upon his arrest that the police realized they were dealing with a big-time drug pusher after they found him in possession of several plastic packs of shabu weighing 1.255 kilograms worth P14.8 million.

Doria said Ocarol gave them several names, one of whom was Rhea Carnecil, a level 2 drug pusher.

Last Jan. 25, Carnecil, a resident of Barangay Pasil, was arrested in a drug bust. She yielded 10 sachets of shabu worth P389,400.

“Si (Carnecil) nagbanggit din ng pangalan (also gave us names) and we conducted a follow up (operation), which lead to the successful buy bus operation and recovery of more or less 10 kilo of suspected shabu (last Saturday night),” Doria.

Within hours after Abellana couple was arrested, the police did a follow up operation that led them to other gang members in Barangay Pasil, namely, Dexter Jaca, the common-law husband of Carnecil; and Elier Atillo.

About 60 grams of shabu valued at P700,000 were seized from Jaca and Atillo, both of whom were described by the police as level two drug pushers.

But two months prior to the series of operations in the last 48 hours, there were numerous arrest of persons who also turned out to be members of the same gang.

Couple Daniel and Meraljean Ongcol were arrested in November last year in a buy bust operation in Barangay Tisa. Both were dubbed as level one drug pushers.

Last Jan. 14, brothers Kent and Marquel Daan were arrested in a buy bust operation in Barangay Suba. Kent is a level one drug pusher while his older brother Marquel was level two.

On Jan. 23, Shiela Abellana, a cousin of Mark, was also arrested.

The alleged drug pushers, from Carnecil down to the Daan brothers, have all been linked to Ocarol and the Abellanas.
Doria said the suspected drug pushers got their supplies either from Ocarol or from the Abellana couple.

Mercy denied they owned the 10 kilos of shabu. She also insisted they did not own the house where the shabu was found.

“Layo ra kaayo amo didto. Mga lima ka balay gikan ngadto. Nahibulong na lang ko kay gipahapa na lang ko sa police ug gipangitaan ko sa shabu (Our house is very far from where the shabu was found. It’s like five houses away. I was shocked when I came home because I was told by the police to drop down and was asked about the shabu),” Mercy said.

Carnecil and Jaca, when interviewed at the CCPO detention cell yesterday, also denied they knew Ocarol and the Abellana couple.

Carnecil claimed it was his first time to meet the Abellana couple, who were brought yesterday to the same detention cell in CCPO.

But Chief Insp. Christopher Navida, the head of CIB, said the drug trail tied them together.

Navida has earlier revealed that the source of drugs was Mark’s brother, Michael, who is detained at the National Bilibid Prison (NBP) in Muntinlupa City.

Michael, who is held in Bilibid on drug charges, also has a cousin in Cebu City Jail imprisoned for the same violation. The cousin at the city jail, police believed, is also a member of the same drug gang.

Doria said they are still trying to establish the identities of the other members of the syndicate.

He said it was likely that some of the drug peddlers who were caught during the CCPO’s “one time big time operation” under Oplan Pokemon last week were members of this gang.

“So may linkages sa taas. So sino mas mataas pa kina Mark, Mercy and Melchor (Ocarol)? Yan ang tinitingnan natin ngayon at kung saan nanggaling yung drugs (So there is a link to higher illegal drug operators. Who are those higher than Mark, Mercy and Ocarol? That is what we are trying to find out), ” Doria added.

Doria said they were also still trying to find out if the member of this new group are remnants of the groups used to be operated by the slain drug lords in Cebu, such as Jeffrey “Jaguar” Diaz, who was killed in Las Piñas City in June last year.

Doria said that if the supplier of Ocarol and the Abellana couple came from Luzon, they believed the drug came from Muntinlupa City.

If it came from Mindanao, then it could be coming from Ozamis City.

Cebu’s open coastlines made it easier for drugs coming from either Metro Manila or Mindanao to get in undetected.

Doria said they have identified a drug route based on the information given by the arrested drug personalities, but he was not at liberty to disclose it due to their ongoing operation.

However, he said, they noted that the island-province of Catanduanes in Bicol, where a shabu laboratory was uncovered, is easily accessible to Cebu. Drugs coming from Mindanao could also get to Cebu via Negros Island, he added, but this still has to be validated.

Doria said they have strengthened port security measures and have also alerted their counterparts in other regions likely used as drug route to Cebu.

Doria said there is a possibility that Ocarol and the Abellana couple are just used as “transshipment” for the drugs coming from a bigger drug trader.

There is also still no evidence to point to a likelihood that shabu is already being manufactured locally, as earlier suspected by the Philippine Drug Enforcement Agency (PDEA).

“Hindi natin pwedeng sabihin meron or wala; but one thing for sure, yung nahuli natin parang transshipment lang. Sila lang yung parang contact person at pwede nilang e-distribute (We cannot say whether or not we already have a shabu laboratory here. But one thing is for sure: those we arrested are just the transshipment people. They were just the contact persons who are being asked to distribute the drugs),” he said.

Read Next
Tumulak wants police to use UHF digital radios