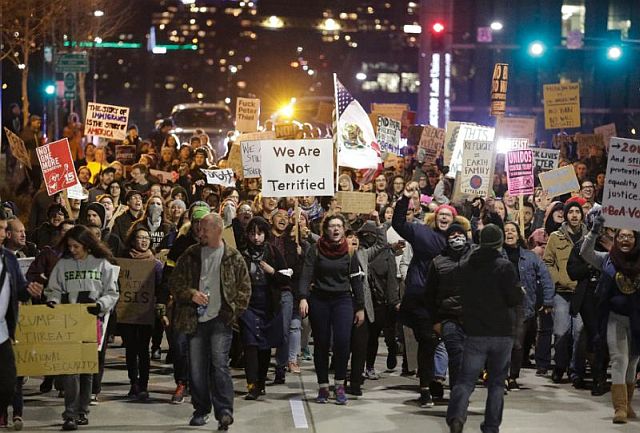 People march in support of immigrants and refugees in Seattle, Washington, on January 29, 2017.
/AFP

The ban was criticized by allies, sparked confusion over its implementation and galvanized Democrats looking for a lightning rod to beat Trump. There was growing unease among Republican lawmakers as well.

Four federal judges moved to halt deportations, around 300 people were stopped or detained worldwide and US civil rights lawyers warned the battle could head to the Supreme Court.

Thousands of noisy demonstrators poured into the country’s major airports for the second day in a row to show support for immigrants and refugees impacted by Trump’s contentious travel restrictions.

“I just hope that we can pass this difficult period while maintaining our values as a country,” said Saif Rahman, a 38-year-old Iraqi-born US citizen who was called in for additional screening after flying into Dulles airport outside Washington.

Lawyers accompanied by interpreters set up shop in airports and fought for the release of those detained on arrival — many of them were in mid-air when Trump signed the decree.

The decree suspends the arrival of all refugees for at least 120 days, Syrian refugees indefinitely and bars citizens from Iran, Iraq, Libya, Somalia, Sudan, Syria and Yemen for 90 days.

At least 109 people were held upon arrival to the United States despite holding valid visas. It was unclear how many were still detained late Sunday.

Top Trump aides downplayed the number as “a couple of dozen” as Canada said it would offer temporary residence to those stranded in the country by the ban.

Under fire from all quarters, Trump issued an official White House statement to deny it was a Muslim ban and blast the media for its coverage.

“To be clear, this is not a Muslim ban, as the media is falsely reporting. This is not about religion — this is about terror and keeping our country safe,” he said.

The decision — which falls short of his 2015 promise on the campaign trail to ban all Muslims from coming to the United States — ignited the biggest controversy since he took office./AFP