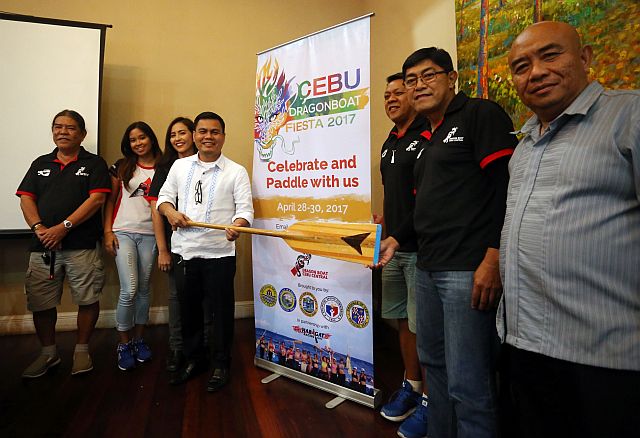 Some of the members of the organizing team for the Cebu Dragon Boat Fiesta headed by Charly Holganza (second from right) gather after a press conference at the Provincial Capitol.
CDN PHOTO/LITO TECSON

Can Cebu become the dragon boat haven of the Philippines? Cebu’s pillars of the sport hope so.

But the bid to accomplish that will depend on the success of the Cebu Dragon Boat Fiesta, which will be held this April 28 to 30 at the Cebu Yacht Club in Lapu-Lapu City.

The organizing Dragon Boat Cebu Central (DBCC) said it would be important for the race to be successful since this will help make Cebu one of the dragon boat destinations in the country.

“We are hoping to make this event as one of Cebu’s annual tourism offering aside from the Sinulog and the IronMan,” organizer Charly Holganza said in a press conference yesterday at the Cebu Provincial Capitol.

By the looks of it, the event looks very promising with the confirmation of international teams. More foreign teams have also expressed their interest to join.

“We have two teams from the USA and one from Guam,” co-organizer and former national team member Nonnie Lopez said.

“Teams from Korea, Italy, Singapore and Malaysia are also interested to join.”

Team DNA and Team DPW from the United States will be spicing up the event alongside the Guam Aces from Guam. Local teams Kugtong EXR, Gruppo Habagat and the Pads Cross-Disability Paddlers are also expected to show their prowess.

“There will be a fiesta atmosphere in the event,” Holganza, a retired general, said. “Families of the participants will be there for sure, that’s why we will be putting up food stalls, organize side events such as photo contest and fire dances.”

Four categories will be raced in the three-day event: the open, mixed, women’s and masters categories.

The event will be for the benefit of Philippine Acceptable Disability Services Inc. (Pads), who willl join the 2017 Paradragonboat Championships in Hong Kong in June.

The Pads team is composed of Cebuano persons with disabilities who were also trained under the DBCC.