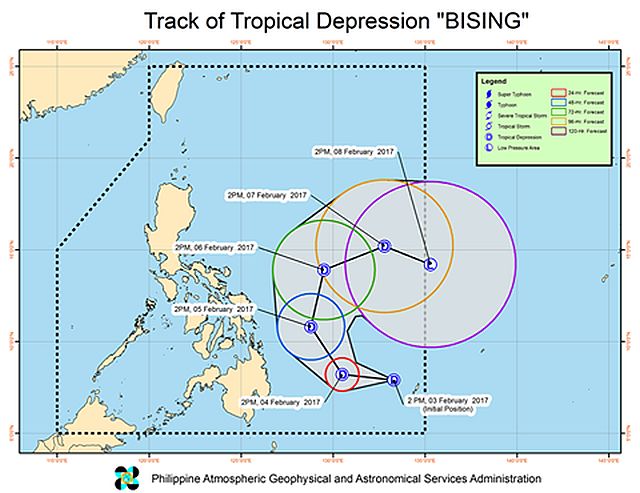 Bising is the second tropical cyclone which enters the country this 2017. (DOST PAGASA FACEBOOK PAGE)

A low pressure area (LPA) spotted in Mindanao has developed into a tropical cyclone named Bising on Friday afternoon.

Romeo Aguirre, weather specialist of the Philippine Atmospheric Geophysical and Astronomical Services Administration (Pagasa), Mactan, said that Bising which is moving northwest of the country will bring light to moderate rains in Cebu over the weekend.

There is less chance for the cyclone to make a landfall because of the northeast monsoon. As of 6 p.m. on Friday, Bising was spotted 735 kilometers east of Hinatuan, Surigao del Sur.

So far no tropical cyclone warning signal has been raised in the country.

Bising is the second tropical cyclone to enter Philippine Area of Responsbility (PAR) this 2017 after Auring last January.

Read Next
UP Otakufest X: The Matrix set on February 18