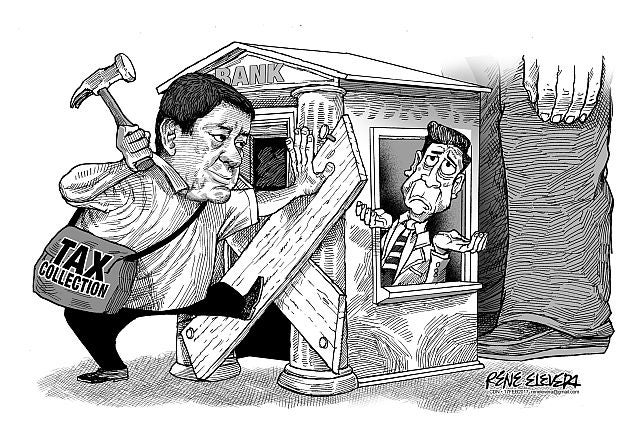 He may have the evidence to justify the closure of BDO’s Magallanes branch but exactly how far is Cebu City Mayor Tomas Osmeña willing to take his feud with SM, Ayala and Filinvest?

The court’s restraining order had been extended to encourage both the city government and BDO management to settle the tax fraud case the mayor filed against the bank’s Magallanes branch, a development Osmena said he had anticipated and no doubt pushed for.

Anyone who had been following the case knows the BDO Magallanes branch case is but part of the larger offensive being waged by the mayor against SM, which owns the bank, as well as Ayala and Filinvest, all of whom are major investors in Cebu City’s South Road Properties (SRP).

But let’s focus first on the bank case. In statements issued to the media, BDO Magallanes branch management insisted that it had fully complied with “all of the city’s requirements for the filing of business permits” it but hedged on how much taxes it paid to the city in the past few years.

The non-disclosure of tax payments may be a trade secret for them but the bank has a point when it said they cannot be faulted for the city government’s failure or oversight in collecting taxes from them.

Exactly how much this oversight cost the city government’s coffers, one could only speculate, though Mayor Osmeña claimed in his Facebook account that a City Hall janitor is paying more taxes to the city in a year compared to the BDO Magallanes bank.

One can also speculate if the mayor will allow the bank to remain open once the payments are made or push through with the closure to serve as a warning and motivation for other banks to correctly file their tax payments and thus spare the City Treasurer’s Office the effort of collecting payment from them.

What is clear at the outset is that the mayor’s threats will rattle businesses that have been operating in the city for some time, those that invested their resources and employed city residents and those from the countryside.

A settlement may be reached but the mayor had succeeded in part in serving notice to businesses allied with the three major investors that they will be held accountable for uncollected taxes and other grievances Osmeña may draw up as the year progresses.

But these offenses, we note, are not so severe that they require full closure of these commercial institutions. After the BDO Magallanes branch, who’s next? The bank could afford to pursue their case but the damage which the mayor hoped to inflict may have been done.

For now, whatever charges will be filed by the mayor against the bank and by extension their parent companies will result in a protracted legal dispute that will make prospective investors think twice about doing business in Cebu City.

Read Next
A commuter’s complaint