Anti-death penalty senator: We do not have the numbers 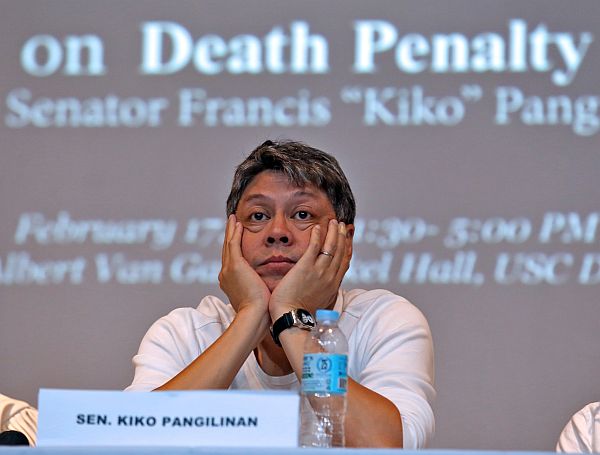 Senator Francis “Kiko” Pangilinan listens to questions about the death penalty during a consultation on the issue at the University of San Carlos Law building.
CDN PHOTO/JUNJIE MENDOZA

As he echoed calls for legislators not to revive the death penalty, Senator Francis “Kiko” Pangilinan also said that he was not optimistic about the chances of the anti-death penalty advocates from preventing the administration in bringing back what he considered a cruel and inhumane penalty.

Speaking to students and members of nongovernment organizations at the University of San Carlos (USC) in Cebu City yesterday, Pangilinan said that the death penalty is not the right solution to criminality, but there’s a possibility of its return.

“I am not optimistic that we (anti-death penalty advocates) have the numbers (insofar as the Senate is concerned). But we will not lose hope. It is anybody’s ball game,” he said.

Of the 24 senators, Pangilinan said only six are openly against the death penalty.

Pangilinan said at least four others may likely join them. He did not reveal their names.

Aside from being a cruel punishment, Pangilinan said death penalty is anti-poor and may likely victimize the innocent.

“We are concerned with our government that inflicts death on its own people. The Philippine justice system makes mistakes,” he said in a public consultation on death penalty at the Abert Van Gansewinkel Hall at USC.

Earlier, Pangilinan said the Supreme Court revealed that lower courts made mistakes in 71.77 percent of the cases wherein the accused were sentenced to death.

Also, he said studies showed that death penalty does not stop crimes.

When the death penalty was implemented in the country from 1996 to 2006, Pangilinan said the national crime volume increased by 15.3 percent or equivalent to 10,000 more cases.

After the death penalty was abolished by former President Gloria Macapagal-Arroyo in 2006, Pangilinan said the crime rate went down.

He said the best way to address criminality and even extrajudicial killings is to improve the justice system by providing more courts and appoint additional judges to expedite the disposition of cases.

“The system of justice in the country is not working. That’s precisely why shortcuts are made,” he said.

Although he didn’t mention names, Pangilinan, the acting president of the Liberal Party, alluded to President Rodrigo Duterte’s anti-crime policies in Davao City which he said weren’t effective.

“There are still several drug surrenderers in Davao. That means there are still those who are into drugs. If the policies used in Davao do not work, how much more if you use it in the entire country?” he said.

Lawyer Regal Oliva, one of the reactors in the activity, said the courts are burdened with so many cases.

“The possibility of giving wrong decisions is highly probable. Crimes proliferated even when death penalty was implemented. Are we ready to welcome back death penalty? We in the IBP proposed that justice be done and served,” said Oliva who represented the Integrated Bar of the Philippines.