Loss of honorarium means hard times ahead for barangay tanods 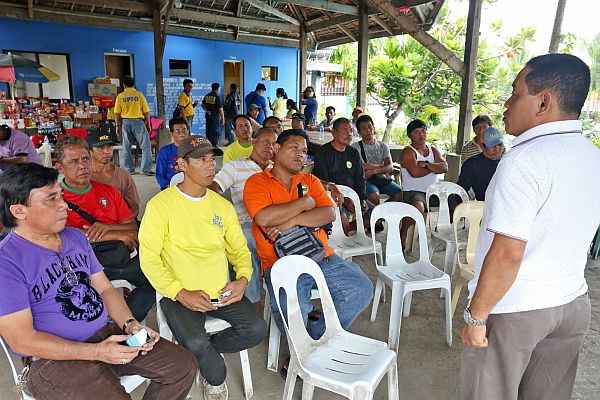 In this photo taken on Feb. 16, 2017, Cebu City Councilor Dave Tumulak (right) talks with the tanods and garbage loaders of Barangay Bulacao headed by Barangay Captain Rodrigo Jabellana (seated left) after the village workers underwent a surprise drug testing, which is part of the internal cleansing being done by the city government in the barangays following the decision of Mayor Tomas Osmeña to cut the honorarium of barangay tanods and garbage loaders.
CDN PHOTO/JUNJIE MENDOZA

Christie Miñoza, 55, has been a tanod (village watchwoman) of Barangay Guadalupe in Cebu City for the last ten years.

She is single but lives with a sibling’s family, helping her extended family members meet their daily expenses as well as in sending her nieces and nephews to school.

She does all of these with an average monthly pay of only P6,600.

This was why she is now worried how to make ends meet after Cebu City Mayor Tomas Osmeña decided he will stop giving honoraria to all barangay tanods and garbage loaders due to budget constraints and pending evaluation of their performances.

For Miñoza, it means P2,000 less in her monthly income, a sizable amount for someone already having difficulties stretching her income from month to month.

Barangay Guadalupe, being the largest of the city’s 80 barangays, has 40 tanods (watch men and women) to help patrol and maintain peace and order in the barangay.

However, only half, or 20 tanods, are recognized by the city and being given P4,000 as monthly honorarium. But being colleagues, the tanods agreed among themselves to split the honoraria so that each of the 40 tanods gets P2,000 from the city. The barangay council gives a separate P4,600 to their Team A members and P3,600 for their Team B members every month.

Miñoza said they can only hope now that Osmeña, himself a resident of Guadalupe, will change his mind and will continue to financially support the tanods.

“Para namo nga pang buntag, wa gyud mi’y laing trabaho. Okay ra tong mga panggabii ang shift kay pwede sila makakita og trabaho sa buntag (For us in the day shift, we don’t have any other jobs. It’s okay for those in the night shift because they can work during the day),” she lamented.

For 57-year-old Diorico Palita of Barangay Bulacao, stopping the honorarium will be such a big loss to him.

Palita has been a village watchman for 15 years. Apart from the P4,000 honorarium from the city government, he only gets another P3,000 from the barangay as counterpart.

The P7,000 he earns as barangay tanod is all he has and the impact of losing P4,000 a month will be harsh on him and his family, he said.

“Dako gyud og epekto namo kay mao ra gyud na amo sweldo. Anha namo tanan kuhaon — suga, tubig, pangkaon. Hinaut unta ibalik ra intawon among honorarium (It will have a huge effect on us because that is our source of income. That’s where we get all our expenses — electricity, water, and food. Hopefully, our honorarium will be given back),” said Palita.

Read Next
Newly formed business group to give Minglanilla a boost