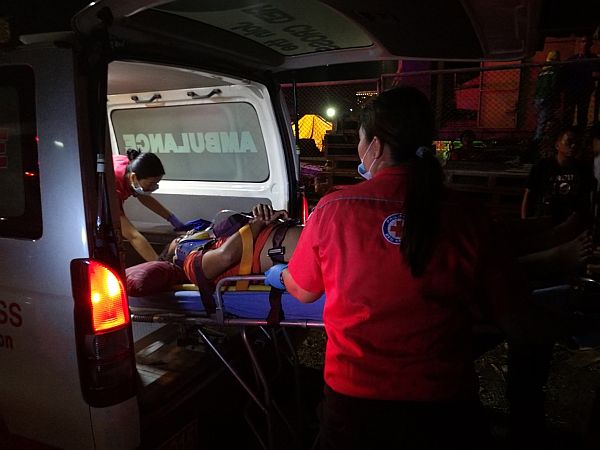 An injured passenger of the sea accident is rushed at Pier 4 to a waiting ambulance which will bring him to the hospital.
CDN PHOTO/CHRISTIAN MANINGO

A loud thud and confusion followed

What was supposed to be a relaxing 3-hour sea trip through a fastcraft from Ormoc to Cebu City turned out to be a harrowing experience for its 90 passengers as the vessel collided with a barge along the Mactan channel late Saturday evening.

France Osalla, a 27-year-old Zumba instructor, was enjoying a nap inside St. Braquiel, 2Go Shipping’s fastcraft, when he was awakened by a loud thud and then confusion inside the vessel, after the collision near the first Mandaue-Mactan bridge.

According to the Philippine Coast Guard, the barge, SMC Barge No. 8 of San Miguel Corp., with a cargo of empty bottles of beer, came from a port in Iloilo and was heading to a Cebu port as well.

Several people were injured, some even desperately asking for help. But Osalla and his companions were so shocked from what happened. They too, suffered from cuts and bruises.

Having experienced being trained as a first aider, Osalla said he decided not to touch the man.

He said it would have been dangerous for the man to experience unnecessary movement, and Osalla was afraid that it might cause additional injury and pain to the man.

But much to their dismay, Osalla lamented that it took quite a while before they were rescued. 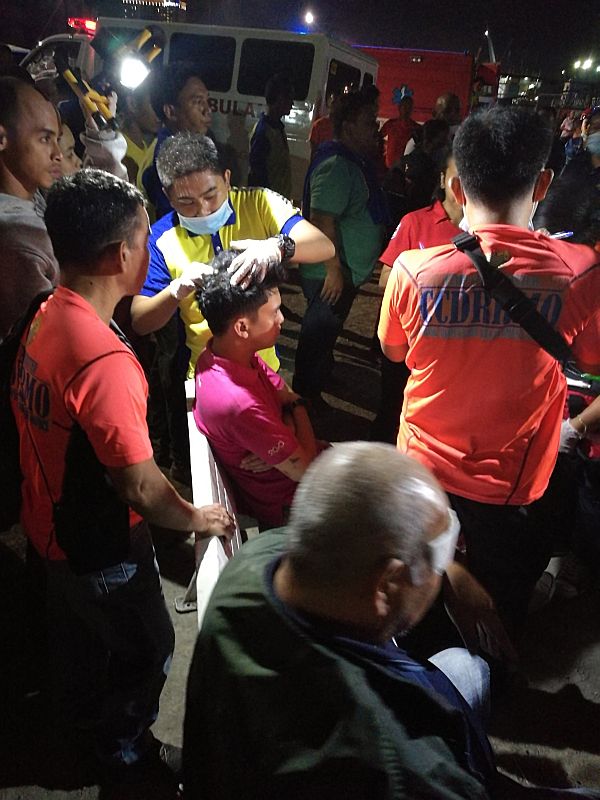 Emergency responders attend to the injured passengers of MV St. Braquiel after their arrival at the Pier 4 at the Cebu port, more than an hour later from the sea accident.
CDN PHOTO/CHRISTIAN MANINGO

He recalled that the accident happened around 10:20 p.m., only 20 minutes before they were expected to dock at Pier 1. But they were stuck in the vessel, in the middle of the sea, for around an hour.

He said they were only able to dock at around 12 midnight already.

“It was traumatic. We don’t want to go back riding a boat again,” he said.

Osalla was with other fellow instructors for a Zumba gig in Ormoc last Saturday. They flew to Ormoc in the morning, but they had to take the boat in the evening going back to Cebu.

He said there was a lot of confusion and panic inside the boat with several passengers with injuries.

Osalla himself had bruises in his face and mouth as well as in his legs. They were seated in the front part of the boat.

When they finally got off the boat, he said they were treated in ambulances waiting in the pier. They were not brought to a hospital anymore since they were tagged green because they were still able to walk. They went home right away.

“Hubag nawong. Samad waet. Dugo ilong. Grabi abi kog mamatay nako. Abi kog nangatangtang ako mga ngipon sa kakusog sa impact. Nibangga gyud ang supercat sa barge sa ubos sa old bridge. like 20 mins nalang abot nami sa pier 1 huhu! Daghan ug sugatan. Kadugay sa rescue. Pero thank God we’re okay (A swollen face. A wounded lip. A bleeding nose. I thought that I was going to die. I thought that my teeth would fall off because of the impact. The Supercat collided with a barge near the old bridge as we were just 20 minutes to Pier 1. Several are injured and we are still waiting for rescuers to help us. But thank God, we are okay),” she said on her Facebook post, a few minutes after the sea collision.

Bereso was with her two bosses and a fellow worker on the fastcraft heading to Cebu on their way to Davao City for a business meeting on Sunday.

She said that she was watching a Korean drama inside the business class section when the St. Braquiel collided with SMC Barge No. 8 of San Miguel Corp.

She said she heard a loud thud as the vessel was approaching the old Mandaue-Mactan bridge and then because of the impact of the collision, she was thrown violently forward landing on the table and chair near her.

She said she was still in pain yesterday from the wound on her face and the bruises on her legs and body.

“I panicked when I saw what happened to my fellow passengers. Noses were bleeding, and I found some teeth on the floor. Others where thrown at the corners of the vessel while some chairs were detached,” she told Cebu Daily News in Cebuano.

She said it was quite dark because the lights went out when the collision happened, but a few minutes later the emergency lights switched on.

Passengers then wore their life jackets. Out of curiosity, Bereso said she tried to check what happened outside.

She said she saw that the front section of their vessel had hit the back portion of the barge.

She said she took photos of the damage and posted it on Facebook hoping that rescuers would arrive soon.

She also said that it was at least more than an hour later or at 11:30 p.m. that they were transferred to another 2Go fastcraft, the MV St. Jhudiel, which took them to the Cebu port’s Pier 4 at 11:45 p.m.

She said she and her companions were treated at Pier 4. They still had to rush to the airport for their 6 a.m. flight for Davao City.

Nagiel Bañacia, Cebu City Disaster Risk Reduction and Management Office (CCDRRMO) head, was among those who led the rescue operation.
He said up to 48 passengers suffered injuries from the incident with four considered as severely injured.

“Our operations ran smoothly due to our close coordination, command, control and respect to each other. We might have some procedural lapses. I make an apology. And I take full responsibility and I am sure that we could do it better next time,” he said in a Facebook post a few hours after the incident.

However, John Manuel Alip, deputy commander of Philippine Coast Guard (PCG) for Cebu Station, who sent his people to check on the injured yesterday, said that 58 passengers were sent to the hospital and 23 were admitted as of 2:30 p.m.

He said that the 23 passengers were admitted at the Cebu Doctors’ Hospital, Chong Hua Hospital and VSMMC.