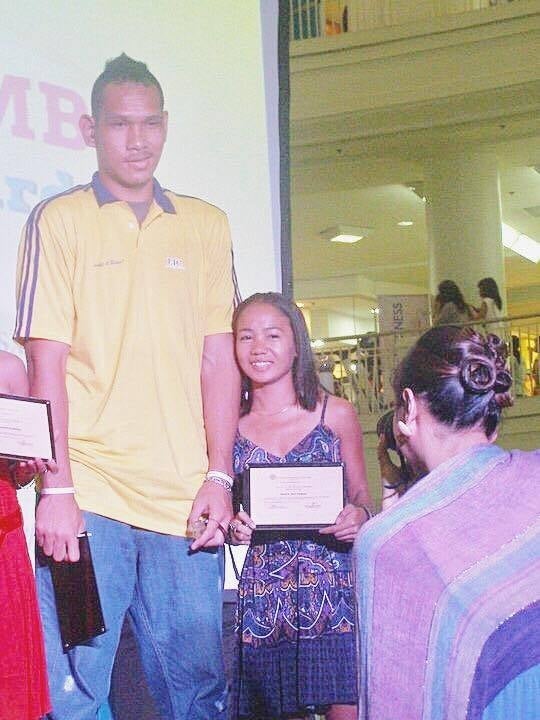 SEE, THEY GO A LONG WAY. Mary Joy Tabal, the first Filipina marathoner to see action in the Olympics, poses with June Mar Fajardo before the Kraken was recruited in the PBA. This photo was taken during the 2011 SAC-SMB All Cebu Sports Awards where both Tabal and Fajardo received minor citations.. Next month they will receive major awards from SAC.
contributed by mary joy tabal

With all her enviable racing achievements, it’s easy to think Mary Joy Tabal is all about running.

But not many know the Cebuana Olympian is a true blue sportsbuff. She likes other sports too, and just recently we found out she’s a big fan of basketball.

“Since I was in Grade 6, I already liked basketball. That’s one sport I keep joining in every Intramurals even if I had a hard time making my shots reach the ring,” Tabal, the first Filipina to compete in an Olympic marathon event, said. “My uncles also liked basketball so everytime there are PBA (Philippine Basketball Association) games, we would watch together.”

So what’s her favorite PBA team?
“I’m a die-hard San Miguel Beer fan ever since I liked basketball,” Tabal said, referring to the team that has the most number of titles in the league with 22.

“My uncles were Alaska fans and me and my siblings were for San Miguel. So we’d argue and be very noisy when we watch both teams play against each other.”

So in the ongoing PBA Philippine Cup Finals between San Miguel and Ginebra, It’s no question who Tabal is rooting for.

“Solid BEERMEN,” Tabal wrote in a post in her Facebook account after San Miguel Beer took Game 1 of the best-of-seven finals series with a 109-82 victory Friday night.

And it’s not only because San Miguel has fellow Cebuano June Mar Fajardo that Tabal cheers for the Beermen.

“I was really a fan even before Fajardo. My idols were Danny Ildefonso, Dondon Hontiveros and Olsen Racela. Now, I’m a die-hard fan of June Mar, Arwind Santos and Alex Cabagnot,” Tabal said. “I never changed my team in the PBA wars. It was always San Miguel.”

Asked about the ongoing battle between the Beermen and the crowd-favorites Barangay Ginebra, Tabal sees the series going the distance.

“It really depends with how Ginebra plays. But I noticed that every Finals series would really reach Game 7,” the 27-year-old multi-titled long-distance runner from barangay Guba, Cebu City said. “But I’m really for San Miguel.”