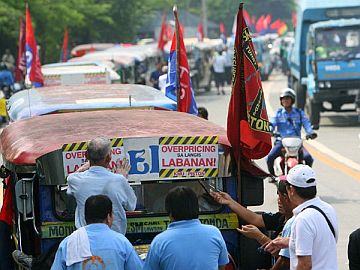 Transport groups in Western Visayas are also expected to hold a strike on Monday to protest the phaseout of public utility vehicles (PUV) that are 15 years old and above.

Expected to be affected are the provinces of Aklan, Capiz, Iloilo and Negros Occidental.

The No To Public Utility Jeepney, Public Utility Bus, Asian Utility Vehicle Phaseout Coalition in Panay said the strike would be joined by drivers and operators of public jeepneys, buses, vans and tricycles.

Edgar Salarda, Panay spokesperson of Piston, said they are against the plan of the Department of Transportation to phase out PUVs because this will “force operators to buy electric and Euro 4 engine jeepneys under the management of a private fleet company.”

He said the implementation of the plan will affect 600,000 passenger jeepneys nationwide including 12,000 in Western Visayas.

This will mean the loss of livelihood for 50,000 drivers and operators and small businessmen dependent on public transport for Panay and Guimaras alone, according to Salarda.

He cited that under a new scheme, public jeepney operators will need a minimum capital of P7 million to operate a minimum of 20 jeepneys.

Salarda said the government should instead help rehabilitate PUVs 15 years old and older if the plan is mean to help curb emissions.

But several schools in Iloilo City have announced the suspension of classes on Monday.

The city and provincial governments have also mobilized vehicles to ferry employees and commuters within the city and from municipalities in the province.

Most schools in Bacolod City also declared a suspension of classes on Monday due to a strike declared by the United Negros Drivers and Operators Center (Undoc), Federation of Bacolod City Drivers Associations (Febacda), Sentrong Samahan ng Tsuper at Operators Negros and Piston-Negros.

Classes in Cebu, however, will not be suspended.

Diego Malacad, Undoc secretary general, said about 90 percent of the drivers under their group in Negros Occidental would not ply their routes on Monday from 4 a.m. to 4 p.m./INQUIRER.NET