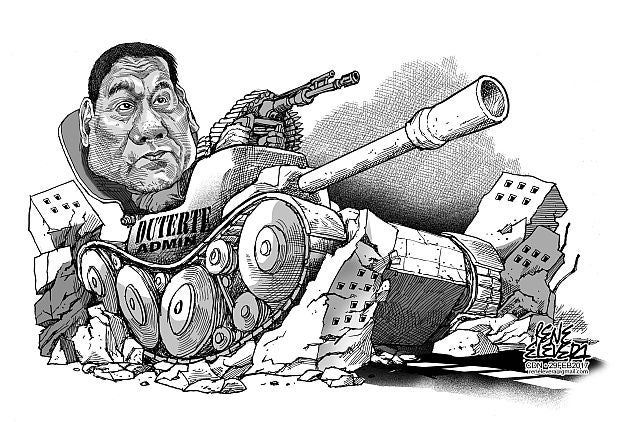 Seeing loyalists of President Rodrigo Duterte and adherents of the first Edsa People Power Revolution stage their own separate rallies in Manila, Cebu and elsewhere around the country drove not a few netizens to voice their despair on social media over the sharpening, deepening and widening rift of the country’s political landscape.

It’s not just a house but a whole country that is divided over the Duterte presidency; its policies and programs that have invited both domestic and international concern for its ruthless, take-no-prisoners war on illegal drug syndicates; its open admiration for the late strongman Ferdinand Marcos; and by extension, its seeming attempts to create scenarios that would justify the declaration or outright imposition of martial law.

The main sales pitch for the two days’ worth of rallies staged by President Duterte’s supporters is the alleged destabilization plot against his administration by the Liberal Party (LP), one of whose members is now under lock and key.

It remains to be seen if the Duterte administration has a case against Sen. Leila de Lima; but after her arrest, the President’s supporters are “crying out for blood” and demanding the arrest and detention of another arch critic, Sen. Antonio Trillanes IV, for his continued attacks and allegations of corruption raised against the President.

While the senator, a former mutineer, can take care of himself, we voice concern over the aggression and viciousness in which the President’s supporters attack critics of his administration either on social media, in the streets and any other venue however legitimate the criticism and questions are.

Feeding their frenzy is Presidential Communications Secretary Martin Andanar who continues to insist and in fact had stoked those supporters who attended the rally with claims that a destabilization plot is in the offing despite the statements of the country’s top security officials that there is no such thing.

With all the resources at their disposal, strong public support and a super majority in Congress, what is there for the Duterte administration to fear?

Apparently something from the military, said American historian and Southeast Asian studies expert Alfred McCoy who claims that the President is tempting a coup with his continued support of China and other communist countries.

But the military won’t move until it senses popular support for the president’s ouster which isn’t happening due to his strong numbers in surveys.
If by “change” the Duterte administration meant the continued existence of extrajudicial killings, the bullying and intimidation of critics and the opposition, and threats of a creeping martial law among others, then the country is in for more troubling times ahead.

Read Next
The wuss of Oz