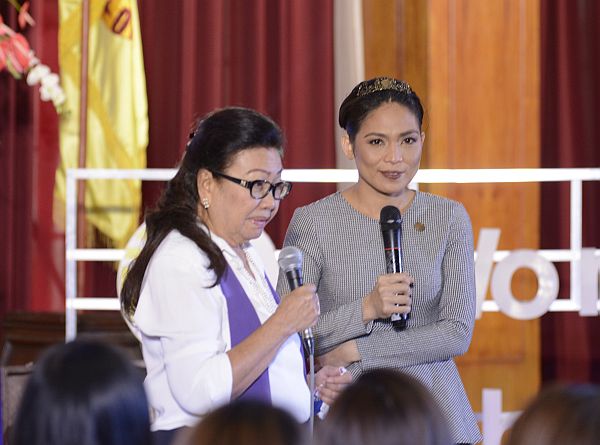 Raquel Choa shares her story of struggles and success during the 17th Women’s Congress at the Capitol Social Hall that was also graced by Vice Governor Agnes Magpale.
CDN PHOTO/CHRISTIAN MANINGO

The first day of March marked the start of National Women’s Month celebration at the Cebu Provincial Capitol.

With the theme “We Make Change Work for Women,” the event opened with the 17th Cebu Provincial Women’s Congress at the Capitol Social Hall, where Vice Governor Agnes Magpale talked about the province’s efforts to help eradicate violence against women and young girls.

A champion for women and children’s advocacy, Magpale said the provincial government has been doing its part to institutionalize change at the local level.

“We are very supportive of the fight against illegal drugs. Most victims of violence claimed that their attackers were high on drugs. With the fight that the President (Duterte) has waged, we are also trying our best to do our part,” Magpale said.

Also gracing the event was the country’s chocolate queen and Philippine Daily Inquirer’s ambassadress Raquel Choa, who narrated her life story, starting from her humble beginnings in the mountains of Balamban to finally reaching the pinnacle of her success as the internationally acclaimed proprietor of Ralfe Gourmet Artisanal Chocolate as well of The Chocolate Chambers.

A mother of eight, Choa said that balancing career and family is difficult but achievable as long as one gives her best and surrenders everything to God.

Choa likewise called on mothers to spend time with their children, especially in a fast-paced generation of today.

“Be open and communicate with your children as much as you can. Even how busy you are, find time to talk with them,” Choa said.

Choa is also a fashion designer who credited her sewing skills to her grandmother and the Technical Education and Skills Development Authority (Tesda), where she took a garment course that taught her the basics of sewing and pattern making.

Even though she did not finish her college degree, Choa said Tesda had been instrumental for making her who she is today.

“I became a fashion designer after I graduated in Tesda. (Take advantage) of whatever program and never stop because it’s not the end of the world, especially when you have children. In Tesda, short lang ang mga courses and are not expensive.”

Governor Hilario Davide III, for his part, said he was thankful that the Philippine Women’s Commission chose to kick off the monthlong celebration in Cebu.

Davide explained that the provincial government, through the Cebu Provincial Women’s Commission, has been very active in its campaign for the protection of women’s and children’s rights.

“We should all protect our women and look after their welfare always,” he said. /Correspondent IZOBELLE T. PULGO

Read Next
Duterte calls on Filipinos to stand up against corruption