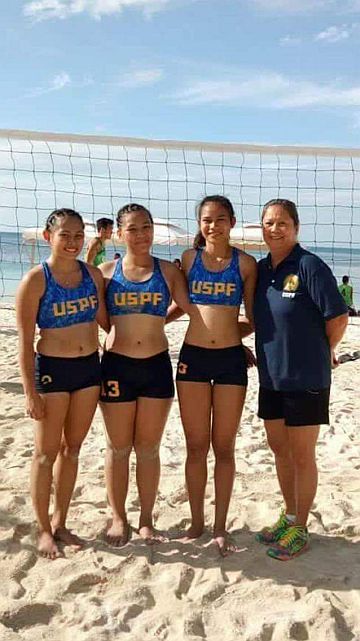 But with champion Southwestern University and runner-up University of San Jose-Recoletos backing out from the competition due to undisclosed reasons, the Lady Panthers were called.

And they did not disappoint.

The USPF trio of Danielle Panangin, Charisse Sungahid and Rhoda Ypil swept Team Bohol, 2-0 in the best-of-three regional finals late last month to earn an outright berth into the National Finals which will be held in Zambales this April.

The championship was also the first title for newly-acquired head coach Yolanda Rizarri who was hired by the USPF management to change the culture of the Lady Panthers who has been on a back end of three straight bronze medal finishes in the CESAFI.

Winning a crown in the regional level certainly brought a glimmer of hope for the Lady Panthers who have made known their hunger for more as they aim for the national crown even with powerhouse National Capital Region installed the overwhelming favorite….as expected.

Rizarri knows it would be a gargantuan task for her ladies but she hopes that their sacrifices in training would translate inside the court for them to have a good chance of winning the crown.

“Our goal is to be a champion bringing the name of our school USPF and as the proud representatives of region 7,” Rizarri said. “I think we should have more focus on the training which is what we are doing right now. Improve the endurance and skills,” she added.

The PRISAA National Finals is scheduled from April 22-29 in Iba, Zambales.