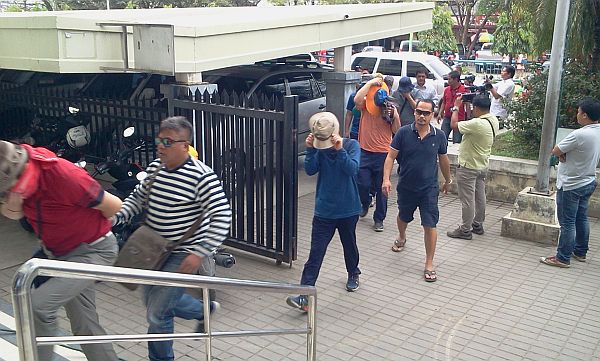 South Korean tourists who were engaged in a sex tour in Cebu, after paying the equivalent of P250,000 per person to a Korean syndicate, were charged before the Lapu-Lapu City Prosecutor’s Office on Monday.
CDN PHOTO/NORMAN MENDOZA)

Seven, out of nine South Korean nationals arrested by the National Bureau of Investigation (NBI-7) last Friday for engaging in a sex tour in Mactan Island were charged before the Lapu-Lapu City Prosecutor’s Office on Monday.

Namgyun Shin and Byeonghae Park were not included in the charge as their two Filipina sex escorts were not around when the group was raided by the NBI last Friday. According to the NBI, the two had been released as there were no witnesses against them.

Led by Special Investigator Arnel Pura, NBI-7 endorsed the complaint before Lapu-Lapu City Prosecutor Ruso Saragoza at past  2:00 p.m. yesterday.
The arrested Koreans refused to be interviewed and covered their faces until they were led into the inquest room.

According to the NBI complaint, sometime in the first week of February, an informant relayed information that a group of Korean nationals was actively promoting and advertising sex tours through the internet to entice Korean males to come to Cebu.

The package included providing Filipina partners who were pre-selected by the clients from pictures provided by the syndicate through the internet.
The syndicate’s Cebu leader was identified by NBI as a certain “Choi.”

The group allegedly had a local contact who provided the Filipina partners for a fee.

A website maintained by the syndicate served as the platform from which the transactions were being carried out such as payments, air tickets, schedule of arrival/departure, transfers, accommodation, tour sites to be visited and other related concerns.

Last March 1, the Korean tourists were monitored by an asset arriving at the Mactan-Cebu International Airport (MCIA).

They were met by two Korean guides identified as Andy and Kim, both under the employ of “Choi,” the NBI complaint further stated.

The names Andy and Kim were later verified to be Kim Duckhun (Andy) and Kim Jaesung (Kim).  Another Korean who turned out to be the hotel owner also showed up and assisted in loading the guests’ luggage. He was later identified as Wonbin Seo or “Alvin,” said the NBI.

According to the complaint, the group then proceeded to Rendezvous Hotel, a seaside hotel with a two-storey beach house located in Barangay Marigondon where their Filipina partners had been waiting.

The Koreans’ arrest was the result of a much better public awareness of problems surrounding Cebu’s tourism industry, according to Cebu Vice Governor Agnes Magpale who lauded the public’s initiative to report similar incidents to authorities especially with the influx of more tourists with the advent of the summer months.

On the average, Magpale’s office at the Provincial Women’s Commission (PWC) receives around 20 reports per month from anonymous tipsters.
“One thing I can say is that the awareness is there otherwise kanang mga tipsters, di man na mangguwa (those tipsters will not come out in the open)” Magpale said.

(Before, no one would tip us but now, since we’ve become very active in the operations, we get a lot of tips. People also know now that these things are illegal so they report incidents to us and we keep all these reports confidential.)

Magpale said that two of the nine Cebuanas rescued from the South Korean sex tourists were hesitant to pursue legal action against them.

Magpale explained that it is not unusual for trafficked victims to be apprehensive in filing cases against the perpetrators.

(That’s the normal reaction of a victim. They don’t usually cooperate because they are ashamed especially if they are of age.)

Magpale assured that the provincial government will assist the victims in the prosecution of the case, as well as in their rehabilitation and aftercare.

As to the Koreans themselves, Magpale believes that the incident had no connection to allegations of a “Korean mafia” operating in Cebu.

“I don’t think there’s a mafia link,” she said.

Governor Hilario Davide III, however, believes that the matter should be thoroughly investigated.

The nine Korean nationals arrested by NBI-7 came to Cebu after they booked a sex tour package online which paired them with Cebuanas aged between 19 and 21 years old.

The sex tours peddled online are in Korean and being offered by a group of Cebu-based Koreans to their male compatriots.

For a fee equivalent to P250,000, those who sign on to the tour will get round-trip tickets, accommodation in posh hotels and a chance to see the sights and the nightlife of Cebu in the company of young female sex escorts.

In Mandaue City, Mayor Gabriel Luis Quisumbing urged the private sector to help law enforcement agencies by providing them with vital information on suspicious activities happening in their respective localities.

Quisumbing emphasized that public cooperation is still key in tracing incidents of human trafficking and other crimes and preventing them from recurring in the future.

“We need actionable information from the public. Tungod sa kadaghan sa atong kinahanhlan i-monitor (With a whole lot of things that we need to monitor in the city), things like that tend to slip. Which is why we need involvement from the private sector to let us know,” Quisumbing said.

The mayor lauded hotel and motel establishments in Mandaue City for their positive response to his call for cooperation.

“We had talked to some of the motel owners and many of them had signified that they are willing to cooperate when it comes to suspicions of child pornography, illegal drugs, possible prostitution and similar acts,” Quisumbing said to  ensure that these premises are not being used as hideouts for drugs or human trafficking.

Quisumbing also said that the city had enough livelihood programs, scholarship grants and financial assistance to help women and the youth so that they would not have to resort to the sex trade to make ends meet.

Ycong ordered Lapu-Lapu City Police Director Supt. Rommel Cabagnot to coordinate with NBI so that officials could later call for a meeting with hotels, resorts, pension houses and motels for the city to give them proper advice.

The meeting will also include representatives of the Korean community.

They will also call the attention of the Association of the Barangay Council (ABC) to monitor their barangay with regards to the sex trade and if possible to initiate an education campaign to avoid it, Ycong said.

Acting Vice Mayor Harry Don Radaza said they will come up with an ordinance to help prevent sex tourism in the city through the imposition of stiff penalties against violators.

Read Next
PNP appeals for help in decongesting jails