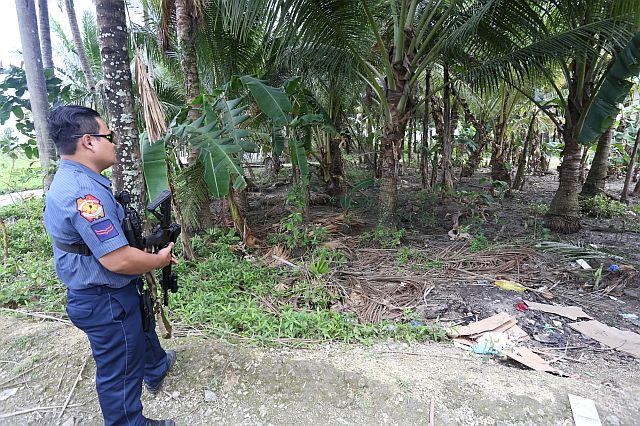 Danao City police officers return to the crime scene where suspected drug pusher Julius Gacita and his cohorts Dexter Diango and a certain Edwin were killed after they engaged police in a shootout in Sitio Libon, Barangay Guinsay, following a buy-bust operation. (CDN PHOTO/JUNJIE MENDOZA)

According to the head of the Police Regional Office (PRO), Chief Supt. Noli Taliño, drug dealers now have high-powered firearms in some areas of the region as they will do anything to protect their illegal drug business.

Taliño added that drug dealers also believe that police will fear them if they were heavily armed.

“The more we will motivate our policemen to conduct more operations against drug pushers,” said Taliño, adding that he is still not satisfied with his men’s performance on the illegal drug war the past two weeks.

Last Tuesday, three drug dealers were killed in a shootout with Danao City policemen. They were armed with a machine gun. Earlier, on Jan. 21, two others were killed and five were arrested in an anti-drug operation, still in Danao City after engaging police in a gunfight using high-powered firearms.

Others, he said, have a bunch of bodyguards.

There are at least 20 drug personalities monitored by Batobalonos which include old and new players in the illegal trade.

In Moalboal town, southwest of Cebu, an estimated P1.1 million worth of shabu (methamphetamine), weighing 96.2 grams, were confiscated from Jemjem Longcob, Jessie Carticiano and Marvin Gabales after a buy-bust operation which also yielded a .38 caliber pistol.

In Pinamungajan town, still in the southwest, two drug suspects identified as Sawhil Generalao and Charlie Rapana evaded arrest after engaging police in a firefight.

In Lapu-Lapu City, seven persons were arrested in a string of police operations beginning Tuesday evening in Barangays Bankal, Pajac, Basak and Gun-ob.

The combined operations in the city netted almost a million worth of shabu and three unlicensed firearms, police said.