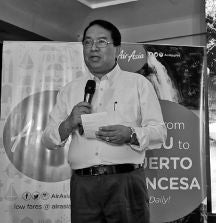 Tourism stakeholders in Cebu were one in mourning the passing of Department of Tourism Central Visayas (DOT-7) Director Catalino “Butch” Chan III, considered as one of the pillars of the Philippine tourism industry.

Joselito “Boboi” Costas, Cebu provincial tourism officer, said it was a sad day for the industry because Chan was known as a “doer.”

“He made things happen for Philippine tourism, but not everybody knows that,” he told Cebu Daily News in a phone interview.

Chan, who is in his early 60s, passed away on Thursday afternoon at a hospital in Cebu City. CDN was able to confirm his passing.

Other details, however, were unavailable as the family requested privacy in mourning.

Costas, who knew Chan from when he was still DOT director of Northern Mindanao, said the man was really an asset.

“He had so many plans. Last week, he presented to us his plans for the region. We were supposed to go to Manila next year to promote the Visayas in roadshows. We were also set to roll out a capability building program for tourism stakeholders,” Costas added.

Edilberto Mendoza Jr., president of the Cebu Association of Tour Operators (Cato), said Chan’s death was a big blow to the region’s tourism industry.
“Today is such a sad day. Let us pray for the eternal repose of his soul,” he said.

Chan served as director of the Department of Tourism in Northern Mindanao (DOT-10), but he never saw this as a hindrance to serving DOT-7.

The late director was born in Mambajao, Camiguin to the late retired Judge Ceferino Chan, founder of Camiguin Telephone Cooperative, and the late Mercedes Echaves, who founded the Mambajao Community Rural Bank.

The director had said that his mother was from the midwestern Cebu town of Aloguinsan, who later met his father during their college days at the University of San Carlos.

He was also a travel agent in Cebu for four years so he knew the market here.

After graduating with a degree in Business Administration with a major in Marketing at USC in the late 70s, he worked as managing tour director at Baron Travel Corporation for three years before returning to Camiguin.

He became tourism officer there, and he was also one of the founders of 38-year-old Camiguin’s Lanzones Festival.