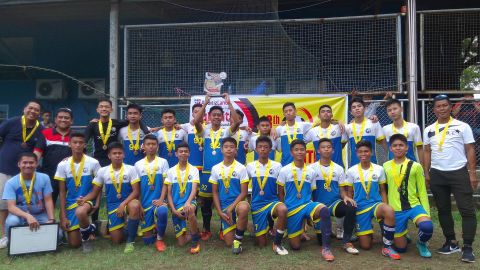 Don Bosco Technological College (DBTC) players show off their trophy and medals after they ruled the under-15 boys division of the 18th Aboitiz Football Cup at the DBTC football field./GLENDALE G. ROSAL

In the morning match, SHS-AdC routed DBTC,6-2, to bag the boys under-13 division title. DBTC returned the favor in the afternoon match as it downed SHS-AdC, 3-1, to snatch under-15 division crown.