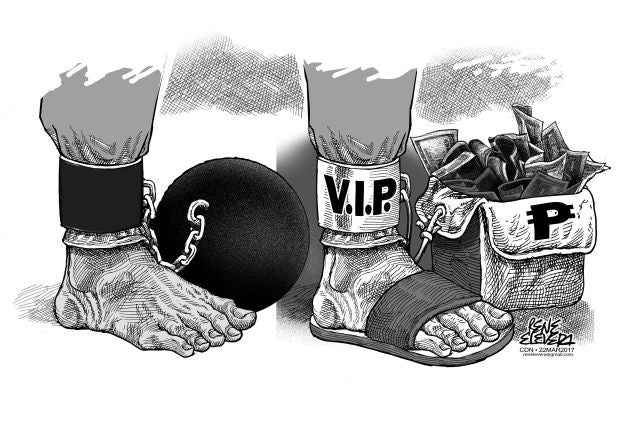 When businesswoman Janet Lim Napoles was brought to then president Benigno Aquino III to signify her surrender, thousands of netizens questioned whose strings she pulled to secure an audience with the highest official of the country.

Regardless, she was booked like a common criminal and jailed, managing to secure a favor or two to make detention a bit tolerable. At least Napoles was a source of information against the lawmakers who benefited from her pork barrel projects.

Years later, a new president is in office whose war on illegal drugs included him naming suspected drug lords in public. One such drug suspect is businessman Peter Lim whose brother David Lim Sr. was involved in an accident that killed a fish vendor a few weeks ago and whose nephew David Lim Jr. was caught on video shooting a Cebuano nurse in Cebu City last Sunday dawn.

Like Napoles, Peter Lim managed to secure an audience with President Rodrigo Duterte. In the case of the younger Lim, his family managed to contact Special Assistant to the President Bong Go in order to facilitate his surrender.

Go also happened to include Lim in the watch list after being called by Cebu City Mayor Tomas Osmeña, who personally went to the Lim residence after the police hesitated to pursue Lim and a judge refused to issue a warrant against him a few hours after the incident.

Chief Supt. Noli Taliño, Police Regional Office chief, vowed there won’t be any special treatment for the younger Lim, but that was probably before he received a call from Go informing him that the family signified David Lim Jr.’s intention to surrender to him.

The younger Lim was not immediately sent to a detention cell but was instead guarded by a special police unit paid for by us taxpayers.

Were Lim any other road rage suspect — say, army reservist Vhon Martin Tanto who shot bicycle rider Mark Vincent Geralde in Quiapo, Manila, in July 23 last year — he would have been beaten black and blue and then presented to the media where he would perhaps be scolded publicly by Taliño.

But he is David Lim Jr., scion of one of the most prominent Filipino-Chinese families in Metro Cebu, and no hair strand would ever be plucked out of his fair head by police who won’t hesitate to rough up common drug suspects before they are presented to the media.

One of Lim’s lawyers claimed that he sought protection from Taliño since he was scared about the alleged threats to his safety from netizens who were outraged by what he did. Lim supposedly shot Cebuano nurse Ephraim Nuñal “in self defense.”

Whatever alibi or excuse the younger Lim offers to the police, the special treatment he received from Taliño merely signified the sad, prevalent reality that the rich can afford to be accorded humane, even VIP treatment while the poor can only expect to be hunted down like animals and presented like prey to the public.