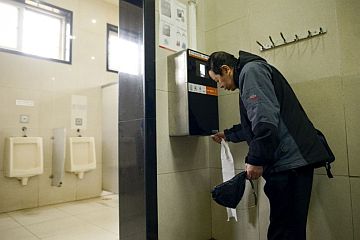 The paper dispensers have reduced waste by 70 percent since they were brought to Temple of Heaven over the weekend, according to the firm behind the device.
/AFP

A years-long crime spree by Chinese toilet paper thieves may have reached the end of its roll after park officials in southern Beijing installed facial recognition technology to flush out bathroom bandits.

Park managers at the Temple of Heaven, an expanse of imperial landmarks in the capital, spent three years testing ways to foil the toilet looters, including fingerprinting and laser sensors, before they settled on the new technology, which was introduced over the weekend.

Elderly square dancers taking their bathroom breaks on Tuesday were greeted by a robotic voice: “Welcome! Please stand in the recognition zone.”

One by one, they obediently positioned themselves on a yellow square marking and watched their faces pop up on a blinking blue screen mounted to the wall. Then the machine dispensed their individual allotment of 23 inches of toilet paper.

If the same individual attempts to collect more bathroom tissue within nine minutes, he or she will be met with a polite rejection: “Please try again later.”

Toilet paper crooks have been known to take home entire rolls, smuggling them out in bulging bags that go undetected at the security gates.

The high-tech solution was welcomed by some of the park’s regulars.

“It’s pretty good, as long as we have enough to use,” said Pu Meilang, 68, who takes frequent strolls around Temple of Heaven.

“It thwarts the rule-breakers.”

The park has sought to put a stop to toilet paper bandits for years, according to Lei Zhenshan, a marketing manager for Shoulian Zhineng, the Tianjin-based company behind the device.

In 2014, they started experimenting with different ways of tracking toilet paper usage and finally settled on facial recognition — but not without some internal dispute.

“It seemed a little awkward at first,” Lei said, “but we saw that the degree of waste was quite severe, and decided to take this technical approach to correcting people’s behavior.”

He said they decided against fingerprinting because people might use all ten of their fingers in turn to maximize rations.

According to Lei, the technology has already reduced waste by 70 percent since it was brought to Temple of Heaven.