‘Lower emissions past one Earth Hour’ 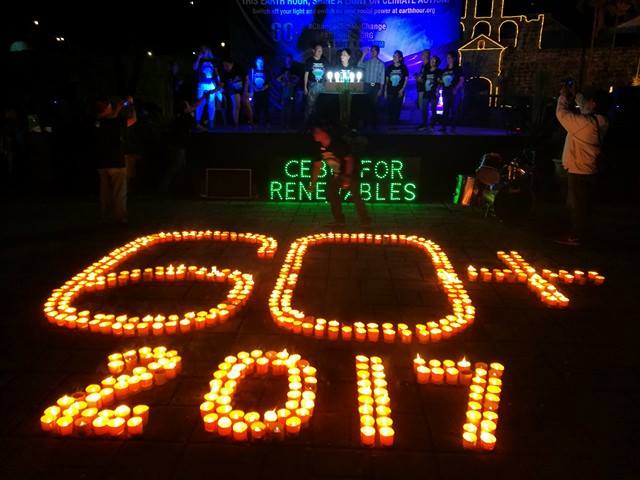 Participants to this year’s Earth Hour observance set up candles to form the “60+2017” logo at the Plaza Independencia. (CDN PHOTO/CHRISTIAN MANINGO)

Reducing carbon emissions should not just be limited to one Earth hour but every hour to help mitigate climate change.

Environmental and militant groups pitched this call in yesterday’s annual observance of Earth Hour in Cebu City held this year at the Plaza Independencia.

The call came as the Visayan Electric Co. (Veco) recorded a slight drop of 3.1025 megawatts (MW) of power during the one-hour switching off of lights in its franchise area from 8:30 p.m. to 9:30 p.m. yesterday.

This was higher than last year’s drop of 2.839 MW during the one-hour switch-off.

Veco is the second largest electric utility firm in the country and counts as its service areas the cities of Cebu, Mandaue, Talisay and Naga and the towns of Liloan, Consolacion, Minglanillla and San Fernando.

The annual Earth Hour observance at the Plaza Independencia opened with a play from Pagtambayayong Foundation together with the University of San Carlos volunteers.

The play revolved around the dangers posed by coal plants to communities and echoed the call for renewable energy.

In her message, Cebu City Councilor Margot Osmeña said it is incumbent upon the public to ensure a cleaner, better world for their children and grandchildren.

“We have the chance starting today, and make a vow. We will do it tonight and today,” Osmeña said before the ceremonial switching off of lights that started at 8:30 p.m. and ended at 9:30 p.m.

Candles were set up on the Plaza Independencia grounds which formed the message “60 + 2017.”

This year’s Earth Hour theme is “This Earth Hour, Shine A Light On Climate Action.”

Cebuano lawyer Aaron Pedrosa, secretary general of the militant group Sanlakas, said “climate justice” should not be limited to one hour of one day in every year.

Pedrosa said the government should fine-tune the Philippine Energy Plan of 2012 to 2030 by issuing a moratorium on new coal plant project applications and building renewable energy plants.

He said this is in keeping with the country’s commitment to the Paris Agreement which is aimed at keeping the global average temperature to well below two degrees Celsius.

The Philippines earlier pledged a 70-percent cut in emissions by 2030.

After the switching-off activity, hundreds of bikers joined in a six-kilometer trip that started at Plaza Independencia to T. Padilla Street through Barangays Tejero and Carreta.

They passed through Mango Avenue and General Maxilom Avenue and then headed to Fuente Osmeña and Jones Avenue, making their stop at Metro Colon.