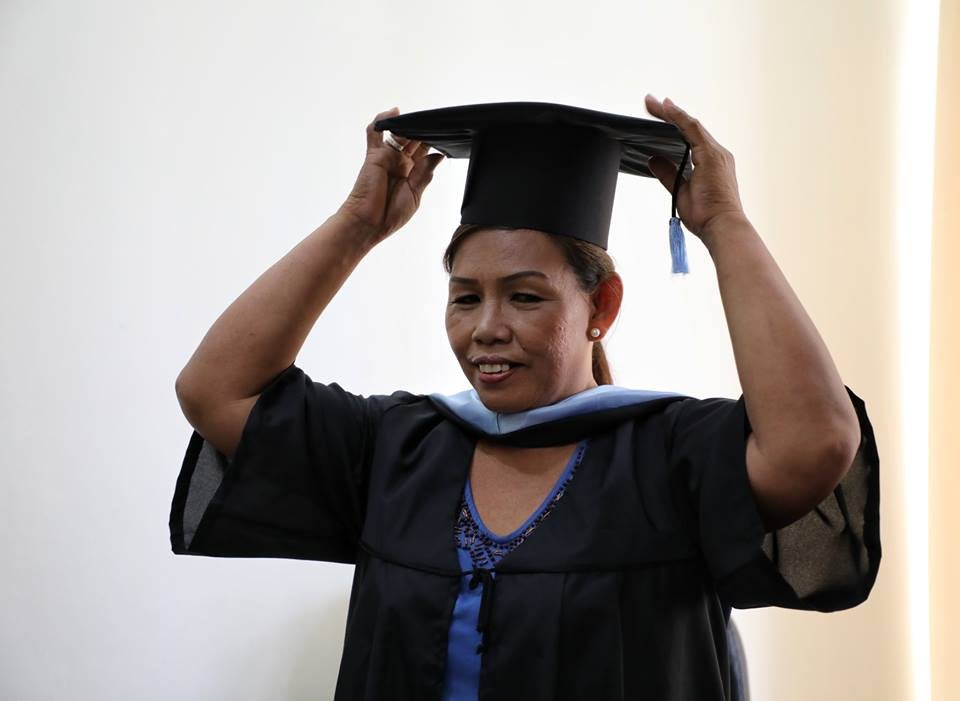 For 56-year-old Juana Caminade Villegas, success does not discriminate age. It comes to those who do not give up on their dreams easily and fight hard for them.

Despite being singled out as the oldest graduate of CTU-Argao, she is nothing short but grateful that she finally made her 30-year-old dream come true.

“Ang ako lang jud ma-advise sa kadtong edaran na nga gustong mobalik eskwela, maayo unta ma-inspire sila nga makakita sa akong picture nga nagpamatuod nga ang edad dili jud na hindrance sa pag-eskwela (My advice to those who are my age and wanted to go back to school, may they be inspired seeing my graduation picture, a proof that age is not a hindrance in getting an education),” Villegas said in an interview a few hours before her graduation rites in Argao yesterday.

“If you have an ambition to finish your studies to help the community, treasure it and focus on studying to achieve it,” she said.

Having a college degree is just the start for Villegas as she plans to further her studies and take up law at the University of Cebu after taking the teacher’s board exams.

Villegas recalled the challenges that she faced in getting her education.

Poverty is her first roadblock, growing up in a family of six where her parents’ earnings were only enough to bring food to the table.

Villegas survived high school by scraping balanghoy or a kind of yam to make suman and sold it in school the next day for her daily allowance.

Her father was a wench man of a shipping line and her mother sold gas and ropes at the road side.

Then the family’s priority was her brother’s first to get the education they needed.

“At first, I wanted to go to college. I took an entrance exam at Southwester University in 1977 (shortly after my high school graduation), but my father wanted my brother to go to college first,” she said in Cebuano.

Being the eldest, she wanted to take up medicine or midwifery even to avail of scholarships to support her studies, but her hopes were dashed by her parents insistence that they could not afford to send her to school.

So three years after she graduated from high school at 19, she got married to Jose.

But his father-in-law stopped their plans because he wanted to have grandchildren especially that Jose is an only son.

They followed their father’s wishes and gave them two grandsons, who are now successful professionals — Joseph, 35, a chemist at San Miguel Brewery, and Jonathan, 33, a lawyer by profession and a municipal councilor of Argao. 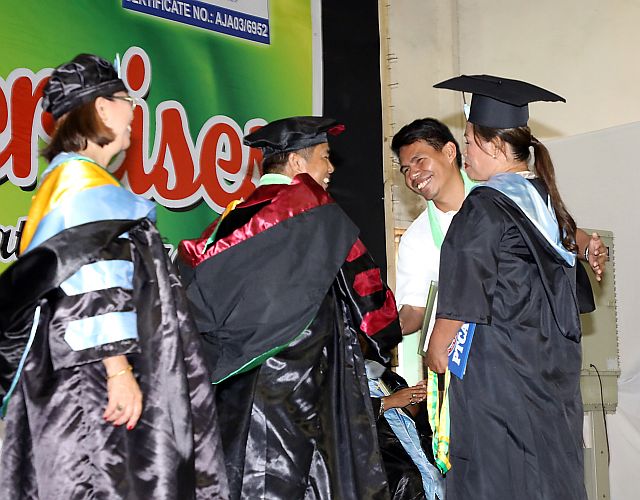 Juana Caminade Villegas (right), 56, achieves her dream of graduating from college as she receives her diploma for completing the Bachelor of Secondary Education at the Cebu Technological University Argao campus. (CDN PHOTOs/TONEE DESPOJO)

Then tragedy struck in 2009 when her husband suffered a stroke and passed away.

After she lost her husband, she focused on her children and nurtured her dream to get an education.

But getting to where she is right now was not a walk in the park because of her age.

Her first year in college was the hardest part.

Villegas, who was fondly called “Nanay” by her batchmates, could still recall it like it just happened yesterday.

She recalled vividly because she was not welcomed with smiles but with doubts by the people around her, who questioned her capacity to learn and to achieve her dreams.

“Gipangutana ko nila if moeskwela jud ba daw ko, makamao pa daw ba ko. Knowing nga ang akong mga anak kay graduate pod sa same school, ingon sila dili ba daw ko ma-offend if dili nako mahimo ang accomplishments nila (They asked if I go to school, could I still cope with my studies? Knowing that my children were graduates of the same school, would I not be offended if I could not achieve what they accomplished)?” she said.

It was even worse when she took entrance examination where she would hear whispers of her fellow examinees about her taking the exams.

It was overwhelming to her, but she conditioned her mind that what mattered would be to pass the exam and she eventually aced it.

“We were angry at her because she was a mother and was a killjoy. But eventually we realized that she is a good and serious person especially in her studies. And she became our mother, who would give advice and so she became the mother of our batch,” said Lantape in Cebuano.

She became loved by her classmates and was voted class mayor during her first year.

Villegas, however, said that she owed her success to her two supportive sons.