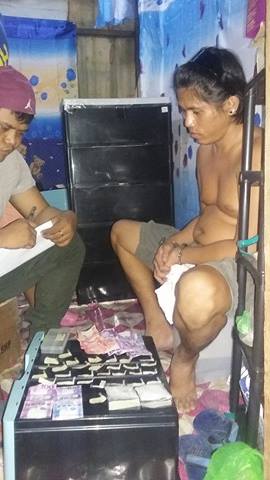 Anthony Anggana (right), 26, admitted to selling drugs saying he had no choice but to resort to the illegal drugs trade after his license expired. (CDN PHOTO/BENJIE TALISIC)

A former security guard was arrested in a buy-bust operation conducted by Mambaling Police Station officers on Thursday night.

Anthony Anggana, 26, a resident of Sitio Naba, Barangay Mambaling, Cebu City was arrested at around 6 p.m. on Thursday in his home after selling drugs to a police officer who acted as a poseur buyer.

Senior Inspector Edward Sanchez, who led the operation, said Anggana is a new player in the illegal drugs trade.

He said Anggana’s neighbors have been complaining about his illegal business leading policemen to conduct the buy-bust operation to arrest him.

Siezed from Anggana were 20 small and two medium packs of suspected shabu worth at least P800,000.

In an interview, Anggana admitted to the illegal trade saying he resorted to selling drugs after his license expired and he can no longer work as a security guard.

He said he had no choice because he had to earn to support the needs of his live-in partner who is four months pregnant with their child.