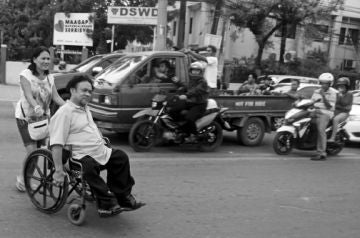 Since 2013, Marilyn would send and fetch her husband Raul to and from the office.
contributed photo

If you happen to visit the Department of Social Welfare and Development in Central Visayas (DSWD-7) office in Barangay Carreta, Cebu City, you have probably met or seen this guy in his wheelchair behind the cashier counter.

It is easy to spot on Raul Miñoza with his semi-afro styled hair either entertaining clients at the counter or making calls to inform suppliers that their cheques are ready for pick-up.

Miñoza has been with the department for 35 years.

He recently received a DSWD-7 loyalty award and a gold necklace during the agency’s 66th anniversary celebration that was personally handed by Social Welfare Secretary Judy Taguiwalo.

A father of four, Miñoza was instrumental in the construction of DSWD-7’s ramp and universal comfort rooms.

“I am thankful to DSWD-7 because aside from my employment, it made sure that persons with disabilities (PWD) like me can freely move around the office,” he said.

According to Raul, his employment in DSWD-7 paved the way to support his family especially in sending his children to school.

Raul’s immediate supervisor Alith Pareja described him as a person who is focused on his job.

Being a PWD not an issue

“His being a PWD was never an issue to us because he delivers just like his abled colleagues,” Pareja said.

Raul has been diagnosed with polio since birth. When he was only three months old he also got sick with bronchopneumonia that caused his asthma up to this day. However, Raul’s disability did not stop him from going to school like abled kids.

His father Eusebio, a public school teacher, would send and fetch him in school riding his bike. He had endured it since Raul was enrolled in elementary up until his early college years. Raul finished his degree in Commerce in 1981.

“He never got tired of sending me to school,” a teary-eyed Raul said.

“If it was not for him, I wouldn’t be where I am right now,” Raul recalled as he reminisce every sacrifice his family especially his father did for him.

Raul shared that his father has even rejected promotions because he will be assigned far from them. “He refused because he always thought of my situation,” Raul disclosed.

Raul started riding public utility vehicles using his crutches when he was already in college as his father was also growing old.

To lessen the family’s expenses, Raul applied as a working student at the then Cebu Central Colleges now University of Cebu.

In 1976, Raul did not expect that he would soon meet the love of his life Marilyn, who worked as his nephews care giver.

Marilyn, a native of San Remigio, Cebu effortlessly got Raul’s attention without her knowing it. At first, Marilyn thought Raul’s fondness of her was because he has found a new friend.

Raul would watch as Marilyn cooks and would spend much time talking to her. Later on, Raul’s parents and siblings noticed his affection to Marilyn.

“They began teasing us and would tell me that in case we fell for each other, they would support our relationship,” Marilyn shared.

“At first, I did not mind the teasing because I was only 16 at that time but as days passed by I realized I had developed a special feeling for Raul,” she added.

When they decided to get married Raul’s family supported them all the way.

The couple is proud that despite their limited resources their children Roldan, Euseca, Romar and Winsor have all finished college.

Four years ago, Marilyn also acquired her driver’s license so that she can send and fetch Raul to and from the office through their minivan/multicab.
Raul and Marilyn are now grandparents to seven grandchildren. /PR