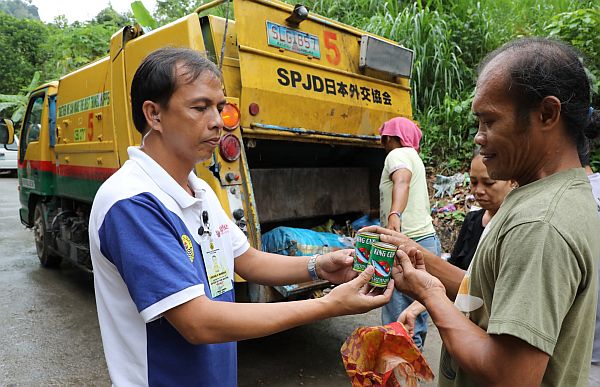 A resident of Lower Laguerta, Lahug receives cans of sardines in exchange for bags of garbage which he himself collected from his zone or sitio as part of Cebu City’s “Basura mo, Sardinas Ko” program. The program pilots some areas of Barangays Lahug and Cogon Pardo as a way to address the difficulty in collecting trash from places which are inaccessible to city and barangay garbage trucks.

Garbage collection has always been a problem of Cebu City, a highly urbanized area – dubbed Queen City of the South – with more than 700,000 residents.

According to Department of Public Services (DPS) head Roberto Cabarrubias, Cebu City generates close to 600 tons of garbage every day.

The volume goes up during special events like the annual Sinulog celebration, Christmas season, All Souls’ Day and All Saints’ Day.

“If we are not going to do anything about this, maybe in 20 years time, we will all be standing on (a heap of) garbage,” he said. But he said the city has enough laws on waste management.

The problem lies in the implementation.

Cebu City Ordinance No. 2031 mandates the segregation of trash at source but this has not been enforced.

Under the ordinance passed in 2004, city and barangay garbage collectors are supposed to turn down unsegregated garbage.

There had been efforts to enforce the law by simplifying segregation to only biodegradable and non-biodegradable wastes and setting different collection schedules for each type of trash.

However, the efforts have not been successful as most residents still refuse to segregate.

Garbage collectors end up receiving unsegregated trash lest they bear the brunt of angry residents who leave these to litter the streets.

Garganera said for residents to be forced to segregate their garbage, the strict enforcement and imposition of penalties is the key.

Garganera, a former barangay captain of Tinago, noted that waste segregation used to be enforced by the city’s Barangay Environmental Officers (BEOs).

“Before, the BEOs were very effective. Even my own driver was put to jail for violating the ordinance. I did not interfere. I don’t know what happened

to them. There are some BEOs being appointed now but they don’t know where to go,” Garganera said.

“You can have the best ordinance. But enforcement is another question,” he added.

Cebu City also has an ordinance that bans business establishments from using plastic every Saturday.

The law was passed in 2012 after plastic bags were identified as the main cause of clogged drainage lines and waterways that resulted in floods.
But the ordinance had yet to be fully implemented in the city.

Cabrera said that the increasing garbage volume is a cause of concern.

Aside from the poor implementation of waste reduction policies, she said, other factors contribute to the problem such as the city’s increasing population as it’s economic boom has inspired those from other provinces to migrate here for work.

The people’s dependency on plastic packaging and their tendency to buy in small packages also add to the problem.

“Almost all products now are wrapped in plastic. People are also now patronizing small-scale buying instead of bulk buying. So the amount of garbage from all these smaller packaging have also contributed in the increase in our garbage volume,” Cabrera said.

Cabrera believes that the problem can be addressed by reducing wastes at source.

An ordinance that would require subdivisions and condominiums to establish their own Materials Recovery Facilities (MRFs) – specialized plants that receive, separate and prepare recyclable materials is now being crafted, she said.

With an MRF, glass bottles, plastics, cartons and papers can be separated and sold to junk shops or plants and establishments that have the facilities to reuse them.

“MRFs will also have composting facilities so that what really is left are residual wastes which will then be collected by the city or the barangay,” she explained.

Cabrera said consultations with the management of subdivisions and housing developers have already started.

Talks are also underway with other business establishments which have an average daily garbage generation of two tons to encourage them to have their own MRFs, said Cabrera.

The city’s environmental consultant plans to meet with scavengers on the possibility of employing them to segregate the wastes at the MRFs of subdivisions and condominiums.

The proposed ordinance will be submitted to the city council by May.

“If this will be in place and will be established, we envision that our garbage generation will be reduced by 30 percent,” Cabrera said.