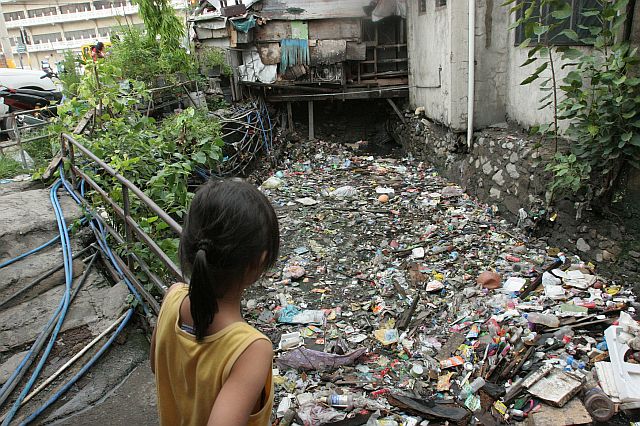 A little girl watches as a creek, along Cebu City’s Barangay Carreta, begins to overflow with uncollected garbage which piled up
during a heavy downpour.

Cebu City may be one highly urbanized city, but it does not know where to dump the 600 tons of garbage it generates daily.

Although it has a sanitary landfill in Barangay Inayawan; the landfill is filled beyond capacity.

The situation has been so for quite a while, since the time of former mayor Michael Rama who ordered the landfill’s shutdown in January 2015.

Last May, incoming Mayor Tomas Osmeña said they were looking at the possibility of reopening the landfill because the Cebu City government was spending too much for its garbage disposal.

Osmeña said reopening the Inayawan landfill will allow the city to save on expenses and is the best temporary measure to ease the problem while the city tried to look for the best long term solution to dispose garbage.

After winning against Rama, Osmeña made good his plan to reopen the dumpsite in July 2016.

But while the reopening of the landfill may have saved the city some money, the dizzying stench from the 15-hectare facility triggered numerous complaints from residents, students and businesses in surrounding areas.

Finding that its continued operation would only bring in sickness to people who lived nearby, the Department of Health (DOH) recommended the closure of the 19-year-old landfill built in 1995 and opened in 1998.

The Environmental Management Bureau (EMB) of the Department of Environment and Natural Resources (DENR) also found several violations with its continued operation.

Among them: the city’s failure to secure a discharge permit to check if effluents from the facility were within standards; its failure to provide cover for all garbage trucks to prevent litter from being blown away; the lack of soil covering after waste spreading and compacting; the lack of a leachate plant and landfill glass flaring system; and its failure to conduct weekly monitoring of chemical and biological parameters.

Still Osmeña refused to close down the landfill, saying that the city could not go back to throwing its wastes in Consolacion as it did not have a valid contract with Asian Energy System Corp., the private landfill operator. 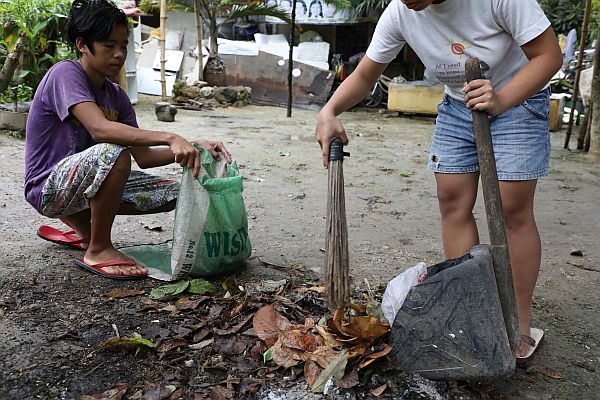 The Cebu City government encourages residents to clean up their own surroundings in exchange for two cans of sardines for every sack of garbage collected in Barangays Lahug and Cogon Pardo – the two pilot areas of the city’s “Basura Mo, Sardinas Ko” program.
CDN PHOTO/TONEE DESPOJO

In September 2016, City Council environment committee chairperson and opposition Councilor Joel Garganera filed a petition for a Writ of Kalikasan at the Court of Appeals (CA) to compel the city to close the landfill.

In a landmark decision last December, the CA ordered the permanent closure of the landfill as it found merit in Garganera’s petition.

Without a landfill to dump its garbage in, the city used a one-hectare area of the South Road Properties (SRP) as a “temporary transfer station.”

It also hired private company Jomara Konstruckt Corp. to haul the city’s garbage into the temporary transfer station at P1,375 per ton.

The hauling service was extended in January for a fee of P25 million after its one-month emergency contract expired.

By February, the city conducted a bidding for a garbage hauling contract worth P77.8 million which included transportation and garbage tipping fees. The contract again ended up with Jomara.

Cebu Daily News tried several times to reach Jomara for an interview about their garbage hauling contract; but representatives from their office refused to be interviewed. 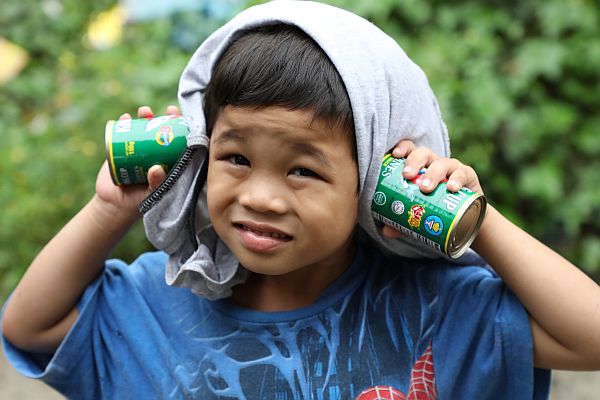 An eight-year-old boy shows off two cans of sardines which he got from Cebu City’s Department of Public Services for a sack of garbage which he himself collected. The boy was among those who responded to the city’s “Basura Mo, Sardinas Ko” program – an experimental scheme devised to encourage residents in remote villages to gather trash and load them into compactor trucks waiting at the main road.

Aside from the permanent closure of the Inayawan landfill, the CA also ordered the city to facilitate the rehabilitation and full closure of the facility.

According to Nida Cabrera, the city’s environmental consultant, the city will be hiring a consultant to formulate a closure plan for the Inayawan landfill.

A bidding is scheduled on April 11 for the closure plan study worth P2.5 million.

The winning bidder will also conduct tests on the level of hazardous gases and other substances in the landfill, develop drainage and fencing plans, and suggest mitigation measures to avoid any disasters inside the landfill.

“The closure plan will include the identification of a post-utilization plan for the landfill after its closure. They will recommend how the city should use the landfill now that it’s closed,” said Cabrera.

The formulation of the closure plan is expected to last for six months.

“It is part of our plan to utilize a portion of the closed landfill for the operation of a new technology – a waste-to-energy (WTE) facility,” she added.
Cebu City will secure a grant from the Asian Development Bank (ADB) for a WTE feasibility study.

Cabrera, Osmeña and other city officials recently met with representatives from ADB about the grant, the amount of which had yet to be determined.

Cabrera said the feasibility study would determine the viability and the cost of putting up a WTE facility in the city.

A pre-feasibility study of the plan is expected to begin this month, Cabrera said.

The city has received four proposals from different foreign firms interested in undertaking the WTE project.

Cabrera said they would start to look into the proposals after the feasibility study which would take about six months to complete.

In the meantime, Cebu City residents will have to cross their fingers in hopes that after all this, the city’s perennial garbage woes will finally come to an end.