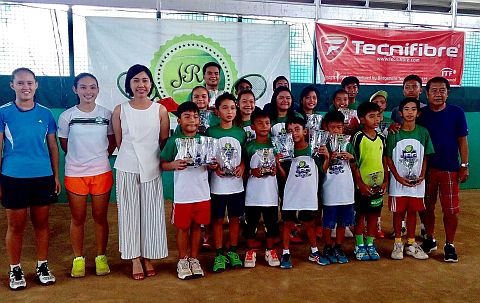 Elizabeth Abarquez showed why she is one of the most dominant youthful tennis players in the country today after she snagged three titles in the JRG Tennis Cup yesterday at the Naga City Tennis Club.

The Palarong Pambansa-bound Abarquez flashed her dominance from start to finish as she defeated Lyrah Mae Repollo, 6-1, 6-1, for the 16-under girls crown then teamed up with Shyne Villareal to win the girls doubles title at the expense of Pherl Bless Coderos and Stella Sampan, 8-2.

Abarquez capped her dominant run by disposing of Villareal, 6-2, 6-4, to take home the 18-under girls title.

“I think the factor to her success was the motivation of her father, Israel Sr. She trains every day for two hours, jogs 16 kilometers once week to increase her stamina,” said Elizabeth’s mother Bebie.

Abarquez is on a tear as she already has won two titles in this year’s Cebuana Lhuillier Age Group Tennis Championships.

Nicholas Ocat of Ormoc City also made his presence felt by topping Hans Cabellon, 6-1, 6-4, for the 12-under boys title before teaming up with Ashton Villanueva in defeating the duo of Eric Longakit and Klein Cañete, 8-4, in the 12-under boys doubles finale.

Meanwhile, University of the Visayas standout Rucel Cero exacted sweet revenge when he outlasted Clyde Patterson 7-6 (5), 1-6, 10-6 in the 18-under boys championship match.

Earlier in the tournament, the 17-year-old Patterson and his partner Alforque sneaked past the tandem of Cero and Feb Delja, 8-7, for the 18-under boys doubles diadem.

In other singles games, Venz Alforque survived Mandaue City’s Vinz Lominoque 6-4, 7-6 to pocket the 16-under boys crown while John Vincent Cañete dominated Douglas Maravillas 4-0, 4-1 for the 10-unisex tiara and Gabriel Trazo of Asturias Cebu crushed Eric Longakit 6-2, 6-2 for the 14-under boys tiara.