END OF THE ROAD 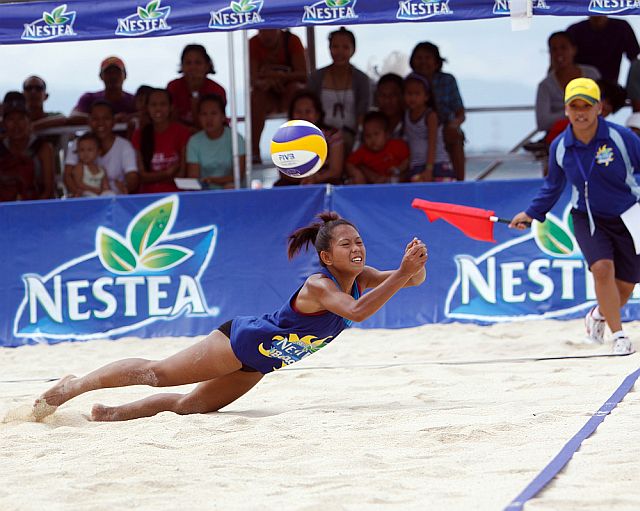 Rica Rochelle of USPF dives to save the the ball in this 2013 photo of the Nestea Beach Volley tournament in Moalboal town, southwestern Cebu.
CDN PHOTO/LITO TECSON

“For those fellow coaches and colleagues that have been asking about the event, we respectfully and humbly regret that the organizer behind the biggest and longest school-based collegiate beach volleyball event in the country will no longer organize and conduct the national invitational beach volleyball championship this year. We convey our heartfelt gratitude to everyone for almost 20 years of Nestea Beach Volley,” Camangian said in his post.

The Cebu volleyball community was downhearted upon hearing the news since Cesafi teams such as the Southwestern University (SWU) and the University of San Jose-Recoletos (USJ-R) have already started their training for the competition.

“It’s very disappointing because our efforts in preparation will all be gone to waste. And making the Nestea tournament was supposedly our reward for winning the Cesafi,” said SWU mentor Dave Arreza.

SWU was the women’s champion of the national tournament in 2008.

“It’s the tournament where the players can compete with the best. Even though you will not win the championship, you can already call yourself a winner just by playing in the tournament because you can not only get incentives but also the experience,” Jaguars assistant coach Heintjie Tomales added.

Camangian, however, said there are plans to hold a new beach volleyball tournament pitting the champion teams of each league around the country either in June or July. They are now looking for sponsors to organize the competition.

Read Next
Star logs easy victory to go up 4-0