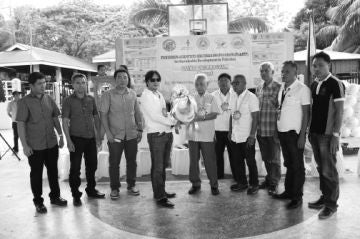 Argao Mayor Stanley Caminero (fourth from left) receives materials for making fish cages that will be used in the training of phase I of the FishSTP during its launching in Taloot, Argao. The ceremonial turnover was graced by Provincial Agriculturist Roldan Saragena (third from left), Dr. Romulo Davide, Capitol consultant for agriculture (fifth from left), and representatives from Bureau of Fisheries and Aquatic Resources and Cebu Technological University and University of the Philippines-Los Baños.
contributed photo

Around 64 fishermen representing each of the town’s 10 coastal villages will join the first phase of the training that will last for four months.

“Our FSTP has been going on for 22 years now. And we want to replicate its success in this new program to help our fishermen,” said Dr. Romulo Davide, who pioneered the FSTP also in his hometown of Argao in 1994.

Davide said that many fishermen are still following the old ways of growing and catching fish.

Some of them, he said, even continue to resort to illegal fishing, using the poison vine “tubli” and dynamite.

Creating a scientific-based program for fishermen that promotes aquaculture is one of the dreams of Davide, the Capitol consultant for agriculture with a salary of P1 a year.

In 2002 when he was still a member of the board of trustees of the Cebu State College of Science and Technology, now Cebu Technological University, he drafted the FishSTP program but it failed to break ground due to lack of support.

“There’s no such thing as an impossible dream,” Davide said. “Today is a historic moment because we can finally start teaching the scientific methods of fishing. With this project, I hope that no fishermen would remain poor.”

What makes the FishSTP unique is that it is the only program implemented in the country so far, he said.

Provincial Agriculturist Roldan Saragena said an initial budget of P3 million was allotted for the pilot project on top of the yearly allocation for his office which could provide additional fund if needed.

According to Saragena, all things needed for the training will be provided by the Provincial Agriculture Office. Included in the fish farming materials are fingerlings of milkfish, kitong, siganid, danguit as well as seedlings of seaweeds and fish pens.

Cresenciano Espina, 56, a member of Poblacion Fishermen Association, said small-time fisherman should have other options rather than taking chances trawling the sea for a huge haul.

Joel Orbita of Barangay Bulasa noticed that his catches were shrinking in the past years. He is hopeful that the program will provide him new opportunities and other ways to increase his income.

Argao Mayor Stanley Caminero described the program as “a gift from heaven,” saying that he had already included aquaculture projects in his development plan before the town was chosen as the pilot area.

He said he would incorporate the FishSTP to its eco-tourism program to make it sustainable.

“Once the program is in full swing, we will place four floating restaurants in between the fish pens to attract more support and visitors,” Caminero said.

The FishSTP is created to introduce mariculture to fishermen particularly in cage fishing and seaweeds farming through a science-based program.

The scope of the program’s phase I includes research exposure, values formation and technical empowerment.

This involves the introduction to studies on scientific methods of culturing fish and seaweeds as well as conducting experiments to test different kinds of feeds, stocking density, and planting distance of seaweeds.

In phase II, the fishermen will be taught how to use mariculture technologies together with members of their respective associations. They will observe the survival rate, growth rate, yield, area and economic efficiency of the cultured commodities and choose which one to cultivate.

Those who can make it to phase III will then undergo a two-day refresher course on various topics taken up in phase I to qualify as teachers for FishSTP.