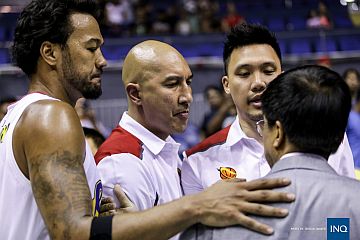 Former player Nic Belasco (second from left), now an assistant for Phoenix Petroleum, is confronted by PBA commissioner Chito Narvasa (right most, back to the camera) after the post-game scuffle with Rain or Shine import Shawn Taggart (not in photo).
inquirer

Rain or Shine import Shawn Taggart and Phoenix Petroleum assistant coach Nic Belasco have been fined by the Office of the PBA Commissioner for the scuffle they were involved in before the Holy Week break in a game won in come-from-behind style by the Elasto Painters.

Figures of the fines will be revealed only on Tuesday morning when the Commissioner’s Office makes its decision public; though, according to a source, it would not be that staggering.

Both personalities will also escape suspensions, even if Taggart swung at Belasco and tagged the Phoenix deputy coach in the head after their game last Wednesday.

Rain or Shine pounded out a 96-94 decision of the Fuel Masters in an ending so tense that Belasco and Taggart got into a trash-talking match and later on decided to settle the issue right at midcourt after the final buzzer.

Commissioner Chito Narvasa did not divulge the amount of the fines with the source saying “there will definitely be no suspensions.”

Belasco, a former hard-nosed defender with several teams, had apologized to Narvasa immediately after the game after the commissioner had called him for a meeting at the league’s Smart Araneta Coliseum office.

Jeff Chan was the hero of that game, where the Painters clawed back from deficits of as large as 17 points to snap a two-game losing streak.

Incidentally, the southpaw gunner from Bacolod, who completed a three-point play with 7.7 seconds left in that game which sealed the Rain or Shine win over Phoenix, was named as the Player of the Week by the Press Corps.

He finished with 24 points against the Fuel Masters, half of them coming in the last six minutes.