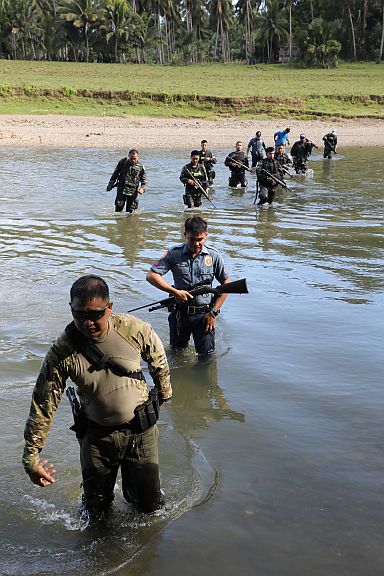 Police wade through a portion of the Inabanga River as they pursue members of the Abu Sayyaf Group who escaped from last April 11’s encounter with government forces in Sitio Ilaya, Barangay Napo, in Inabanga town in Bohol province. (CDN PHOTO/TONEE DESPOJO)

Government troops have surrounded a coastal village on Olango Island, 6.4 kilometers from Lapu-Lapu City on Mactan Island, after a resident claimed to have seen two armed men in the area past 2 p.m. on Thursday.

When police responded to the place, they heard successive loud bursts believed to have come from long firearms at a forested area in Sitio Bas Toral, Barangay San Vicente, according to Chief Insp. Miguel Andesa, chief of the Olango Police Station.

He said different units of the police, along with members of the 47th Infantry Brigade of the Philippine Army, and the Philippine Navy are currently conducting clearing operations in the area to verify whether or not bandits have entered the island.

But Andesa would neither confirm nor deny the presence of armed men in the area.

“Everything is subject for confirmation. We are validating the claim of a woman regarding the presence of armed men. At the same time, we still have to confirm whether or not those bursts came from firearms,” he told Cebu Daily News over the phone.

The Philippine Navy, he said, has cordoned the forest, a part of which is filled with mangroves and coconut trees.

“It’s night. We have to be careful. The best we can do now is to surround the place so that in case there are really armed persons in the place, we can easily go after them,” Andesa said when reached by CDN past 9 p.m. yesterday.

The clearing operations started at around 4 p.m. yesterday. As of 9 p.m., Andesa said they have not seen the reported armed men.

“The mangroves and coconuts are quite many. It’s a good place to hide,” he said.

At 2:20 p.m., a woman, whose identity was withheld by the police, sought their assistance after she allegedly saw two men whose faces were covered with cloth and have brought long firearms while walking along the shoreline of Barangay San Vicente, Olango.

The police then went to the place and heard at least six bursts of what appeared to be coming from firearms.

Many residents were alarmed especially after reports that there are still at least eight remaining members of the Abu Sayyaf Group (ASG) who survived the gunfight with government troopers in Inabanga town, Bohol, last April 11.

This developed as police held for questioning six “suspicious-looking” men on board a van in Barangay Tan-awan, Oslob town, 121 kilometers south of Cebu City.

Five of them are Muslims from Lanao del Norte while one is a Christian from Iloilo, said SPO1 Arturo Balmores, deputy chief of the Oslob Police Station.

Except for the driver of the L300 van who presented a driver’s license, the rest have no identification cards or documents, Balmores told CDN by phone last night.

“We will hold these men for now while an inquiry will be conducted,” Balmores said.

Found inside the van were several toy guns and assorted clothing placed inside at least six sacks.

Based on their initial interview, Balmores said the six men claimed to be selling goods, like toy guns and pieces of clothing, in places where there are fiestas.

“They said they came from Bantayan Island (during the Holy Week). They dropped two of their companions in Balamban and were on their way to Negros Oriental for another fiesta, passing through Oslob,” he said.

Earlier yesterday, law enforcement authorities said the eight ASG remnants of last week’s firefight in Bohol were confirmed to still be on the island, trapped somewhere around Inabanga town.

The Armed Forces of the Philippines already has an idea concerning their whereabouts but is not at liberty to reveal their exact location, affirmed Capt. Jojo Mascariñas, spokesperson of the 302nd Infantry Brigade of the Philippine Army that is leading the manhunt for the members of the bandit group in Bohol.

“They are being monitored now. I won’t tell you the exact place, but they are still here,” he told Cebu Daily News by phone yesterday. The location of the eight bandits came from villagers who, according to Mascariñas, have been readily providing authorities with numerous information even before the P1-million reward was dangled by President Rodrigo Duterte.

He said Boholanos are keen on finding the Abu Sayyaf Group (ASG) members who are believed to have been trapped in Inabanga town.

“People have been providing us with several information every day. Many of them are true. The people here are just very cooperative,” he said.

If P1 million has to be given to anyone who can lead to the arrest of each of the ASG members now in Bohol, Mascariñas said he would not know how the amount will be distributed with the many valid information that have so far reached the military.

“I really don’t know the mechanics. Many of the information we received are valid. I just could not tell you now because the operations are ongoing,” he said.

Frank Baylosis, public information officer of the Municipality of Inabanga, said the army has been tight-lipped regarding the whereabouts of the remaining ASG members.

“There are rumors that they are stuck here in Inabanga. But there has been no official report from the military,” he told CDN.

But Baylosis also admitted that some residents of Barangay Napo, where government troops and the ASG clashed last April 11, have opted to remain in the evacuation centers located in adjoining villages, still fearing for their safety even as some have already returned to their respective homes. 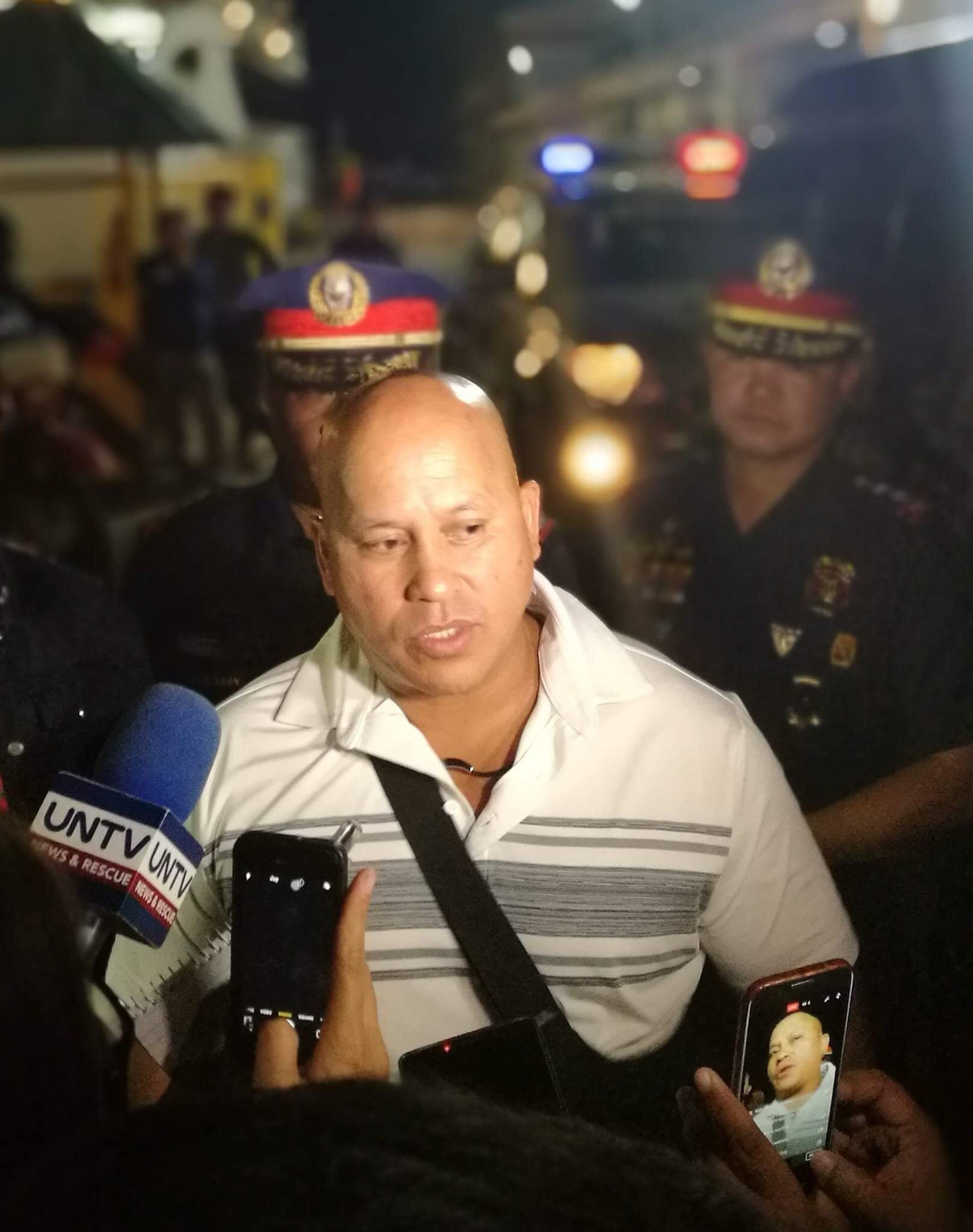 Philippine National Police (PNP) chief Director General Ronald “Bato” dela Rosa on Thursday said the government will seriously go after and crush members of the ASG, not only in Bohol but also in Sulu province where the group is based.

“Bilang na ang mga araw nila. (Their days are numbered),” he said upon his arrival at Pier 3 in Cebu City from Tagbilaran City close to 1 a.m. on Thursday.

Dela Rosa, who was with President Duterte in Bohol on Wednesday, said the President already vowed to stamp out the Sulu-based terror group that has gained notoriety over the last two decades for their brutal kidnap-for-ransom operations, often victimizing foreigners, some of whom had been beheaded for failing to pay the demanded ransom.

Dela Rosa said the P1-million cash reward offered by the President to anyone who can find the remaining eight ASG members in Bohol is a big help in locating the terrorists.

Should the eight suspected members of the terror group come out and surrender?

Dela Rosa called on the public not to be alarmed since the tension is confined in Inabanga town only.

The rest of Bohol and Cebu, he said, is safe.

“What happened was very isolated,” Dela Rosa said. He was grateful that the persons who saw the armed men immediately reported it to the authorities.

“Knowing the Boholanos, they are simple people but they don’t allow these people (armed men) to reign,” he said.

Dela Rosa said the police, together with the Philippine Army, will continue to secure the some 200 delegates attending the Association of Southeast Asian Nations (Asean) trade meeting on Panglao Island from April 18 to April 22. 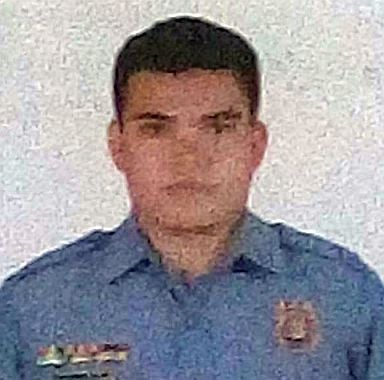 Before leaving Bohol, Dela Rosa dropped by the wake of SPO2 Rey Anthony Nazareno in Calape town. He was a member of the Special Weapons and Tactics (SWAT) of the Philippine National Police in Bohol and was among the four government troopers who died in the gunfight with the ASG members.

“Although the family grieved for the loss of a loved one, they are still proud that he (Nazareno) offered his life for the country,” he said.

“The recognition is due him. He did a good job,” he said. “Losing one’s life is part of the life of a policeman’s life. We just have to be careful,” he added.

Dela Rosa gave a cash aid to Nazareno’s family, but he refused to reveal the amount.

Four members of the bandit group, including their leader Muamar Askali alias Abu Rami, and two local residents were killed in the gunfight in Barangay Napo, Inabanga town last April 11.

Civilians in the crossfire

While President Duterte was firm on his decision in engaging ASG in an all-out war, Cebu Gov. Hilario Davide III expressed concerns about civilians who may get caught in the crossfire.

“Before going to war, for me, I think the President is very confident that our Armed Forces, even the Philippine National Police, are capable of really going on a full-scale war against the Abu Sayyaf. My only concern is that the citizens, the innocent civilians, would get caught in the crossfire,” he said in an interview yesterday.

Davide said the authorities should first determine if there is a necessity to engage the ASG in an all-out war.

“Perhaps the Defense Department or the PNP should first assess and evaluate if it’s really advisable to engage in a full-scale war as what happened in Mindanao in the ’70s might happen again where many died and lives were wasted so we should be cautious. I’m not saying that the President is wrong as he has his own basis to declare such war, just as when he declared war against drugs,” he said.

Davide said the P1-million reward offered by President Duterte to locate each of the ASG members in Bohol does not give anyone the license to kill.

“You know how the President says things. It all depends on his point. In my understanding, although I am not authorized to interpret what he said, but in my view, it’s only when there is real danger to our lives in the presence of the Abu Sayyaf that you have the right to repel it, to fight back,” he said.

Cebu City Mayor Tomas Osmeña, meanwhile, will ask Philippine Amusement and Gaming Corporation (Pagcor) to allow the city government to donate P500,000 of the Pagcor fund as financial assistance to the families of the soldiers and policeman who were killed in the Inabanga clash.

Cebu City receives P4 million a month from Pagcor as its share from the operation of the casinos in the city, but it is meant for specific uses that does not include giving it as aid to fallen policemen and soldiers.

He said he also intends to give a P100,000 cash reward to any person who can tell authorities about the whereabouts of the bandits./with CNU intern Adelyn A. Landiza

Read Next
Tourism in CV feeling impact of Bohol clash