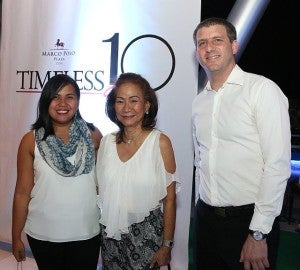 For the second time, Marco Polo Plaza Hotel will hold a run for a cause supporting the Emergency Rescue Unit Foundation (ERUF) of Cebu City this Sunday, April 30.

“We want to give a large amount to ERUF this time,” said Manna Alcaraz, manager of the public relations department at Marco Polo Plaza hotel.

During the “Run for ERUF Year 1” last year, they were able to raise a total amount of P130,00 that was given to the foundation.

In a press release, the management if the hotel pointed out that ERUF has always assisted the hotel in promoting safety and security to Marco Polo Plaza’s guests and associates.

Alcaraz also said that it is not just the hotel that benefits from the services of ERUF.

“They value life, encourage volunteerism and because they serve so others might live, we are showing them how we value their efforts for the community through this run,” she added.

“The 1K distance is made available for families who would want to join with their kids or grandparents,” Alcaraz said.

The gun start will be at 5 a.m. at the hotel’s tennis court.

The first 100 finishers, Alcaraz said, will receive a medal.

Registration for the run is available at Marco Polo Plaza Hotel Hospitality Desk and at Ayala Center Cebu Active Zone.