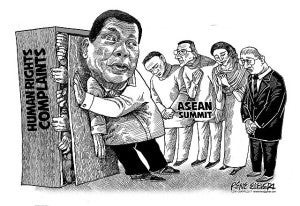 While most in Central Visayas are caught up in the ongoing crackdown of Abu Sayyaf bandits in Bohol province and the unraveling of Supt. Maria Cristina Nobleza’s ties to the extremist group, elsewhere in the country, rights groups have been trying to elevate the issue of human rights violations to the upcoming Association of Southeast Asian Nations (Asean) meeting in Manila.

An international human rights group had been calling on the Asean leaders to focus on addressing human rights concerns particularly in the Philippines where President Rodrigo Duterte’s bloody anti-drug campaign had produced more than 7,000 deaths.

But as that group, the Asean Parliamentarians for Human Rights (APHR), sadly noted themselves, human rights won’t be the central focus of the international summit to be sponsored by the national government since it would also touch on other equally important issues like China’s growing presence on the Spratly Islands.

The summit would also likely serve as the ideal platform for President Duterte to rant and rail against moves to file cases against him at the International Criminal Court, and he can probably expect some support from fellow Asean leaders as well.

Some of the leaders face both rights issues and charges of corruption under their administration, and they would most likely find some relief at the Asean summit which is being secured by the country’s police and military.

Also throwing shade on the rights situation in each respective country is the Abu Sayyaf threat which is tied to other extremist groups with links to the dreaded ISIS terror group.

But that’s another issue the PNP must grapple with even as it failed to address the vigilante killings that continue unabated and had even been swept under the rug due to the ongoing public spotlight on the Abu Sayyaf bandits.

In Lapu-Lapu City, a certain Domie Oyao, whose brothers were drug surrenderers under the PNP’s Oplan Tokhang, was shot down by motorcycle-riding assailants while he was with a friend along a highway early this week.

Oyao’s brother was also killed in September last year, yet no one in his family has raised a howl of protest over the unsolved killing. It doesn’t help that public sentiment is against them since they have been tagged as drug users/peddlers.

This is the new reality that domestic and foreign rights groups must grapple with under the Duterte administration that has somehow managed to parlay its popularity into convincing a greater part of the public towards ignoring due process in favor of eliminating the drug threat through violent means.

And that climate of aggression is also prevalent in the Asean region, whose leaders are not hesitant to deal violence against criminality and share Duterte’s contempt for Western concepts of respecting human rights.

Read Next
Nobleza is no double agent