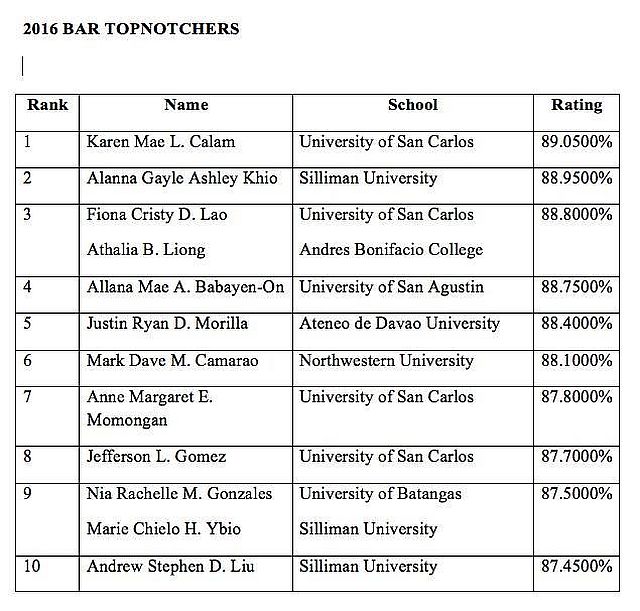 A graduate of the University of San Carlos (USC) in Cebu City topped the 2016 Bar examinations.

With a rating of 89.05 percent, Karen Mae Calam clinched the top spot in what has been considered as the toughest licensure examinations in the country.

Calam bested the record set by another USC alumnus, Athena Plaza, who ranked second in the 2015 Bar examinations, and former Cebu governor and congressman Pablo Garcia, who ranked third in the 1951 Bar exams although the latter’s rating, 91.5 percent – remained the number to beat in the school’s history.

A total of 3,747 out of 6,344 examinees passed the Bar exams held at the University of Santo Tomas (UST) in all Sundays of November last year.

The performance of Calam and the three other USC graduates continued the trend in recent years of a Cebu law school making it to the top 10 in the Bar exams usually dominated by Manila-based universities.

USC has produced at least 25 Bar topnotchers since the university’s College of Law opened in 1937.

This is the first time a USC graduate clinched the top spot, and the first time in the history of the Bar Exams that not a single Metro Manila-based school landed in the top 10.

Sought for comment, Calam only has thanksgiving and praise to the Lord to whom she entrusted the Bar Exams.

“God is just so amazing and merciful. He gave me beyond what I prayed to Him,” she said.

Calam said she has no idea yet as to what move she will do next.

“I really have no particular plans yet. All I want to do now is to go to the Basilica del Sto. Niño and offer all prayers and thanksgiving to God,” she said.

Lawyer Joan Largo, dean of USC, was ecstatic when she learned about the results of the Bar exams.

“I’m overjoyed by the fact that we have clinched the top spot with four other Carolinians on the top 10,” she said in a phone interview.

Largo was attending a seminar in Tagaytay and is due to return to Cebu City later today.

“This is a validation that quality education can be achieved in USC,” she said.

The Bar exam which is given for four Sundays, covers Political Law and Labor Law for the first Sunday, Civil Law and Taxation for the second Sunday, Mercantile Law and Criminal Law for the third Sunday and , Remedial Law and Legal Ethics and Practical Exercises for the last Sunday.