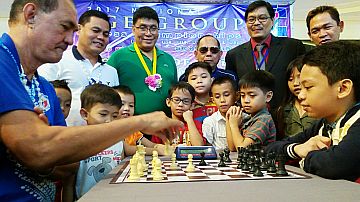 The search for the next Wesley So is on as the country’s brightest young woodpushers strut their wares in prestigious 2017 National Age-Group Chess Championships (NAGCC) Grand Finals, which kicked off yesterday at Robinsons Galleria Cebu in Cebu City.

Discovering talents is one of the goals of NAGCC, said Pichay.

“Chess before was ruled by Russians, Europeans and was even considered a religion in Armenia. But times changed and we are very proud to become witness of a new era of chess where our very own fellow Filipino Wesley So winning the biggest tournaments in the world.

I strongly believe that with the consistent support of PSC, the parents, coaches and the community, we will surely discover not just one but many future Wesley So’s in the Philippines,” said Pichay.

Fernandez, for his part, reminded the participants that the objective should not just winning games but also winning friends.

The tournament drew a total of 196 players coming from Luzon, Visayas and Mindanao.

The first round of the tournament is still being competed as of press time.