Taliño: It was a legitimate operation 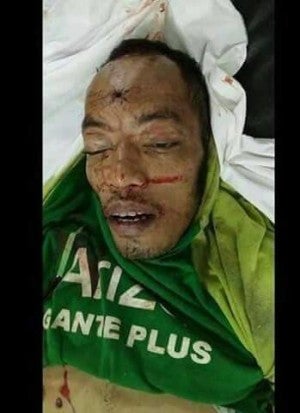 The remains of Abu Saad showing a gunshot wound in the forehead.
contributed photo by Ted Aying

Chief Supt. Noli Taliño, PRO-7 director, said what he knew about the incident was that Kiram tried to grapple for the gun of one his police escorts, the reason why he was killed.

(Around 4:30 in the morning, one of our operatives was surprised when Kiram tried to snatch his firearm, and then he shot Kiram.)

Taliño refused to divulge the name of the policeman who shot Kiram, but he pointed out that the policeman had well within his rights to protect himself since his life was also in danger because Kiram tried to take away his gun.

According to Taliño, the police are ready to answer any investigation into the killing of Kiram from any organization or agency, including that of the Commission on Human Rights (CHR).

“Sasagutin namin yan (We will answer that). Wala namang problema (There is no problem with it). They are welcome to conduct investigation about what happened,” Taliño said.

Taliño said Kiram had provided the police with vital information that would help in their investigation into why the ASG went to Bohol.

(He said something. We cannot divulge some of it. We can only divulge the information that there are still two on the loose and both are wounded.)

Taliño said Kiram just told the police that he was the boat operator and an ordinary ASG member.

Kiram had also revealed that their leaders were Maumar Askali alias Abu Rami and Joselito Melloria, a native of Inabanga town.

(He cannot tell what really was their motive. What was clear was that their intention was to sow terror.)

Kiram, who was arrested in Tubigon town on Thursday, was brought to Camp Dagohoy, the Bohol Provincial Police Office headquarters in Tagbilaran City, for detention. But since Kiram was considered a “high risk” arrested person by the police, he needed to be transferred from Camp Dagohoy to the Bohol District Jail (BDJ), about 8.3 kilometers.

Taliño said the interrogation and investigation on Kiram finished late, which explained why the jail transfer of the ASG member was done at 2 a.m. on Friday.

He said the BPPO also has no proper detention facility at its headquarters, the reason why they decided to transport him to the BDJ, similar to was done to Supt. Maria Cristina Nobleza and ASG bomb expert Renierlo Dongon.

Nobleza and Dongon, allegedly on a mission to rescue the ASG members trapped in Bohol, were arrested after they tried to speed through an Army checkpoint in Clarin town last April. 22.

They were first brought to Camp Dagohoy for questioning and were later transferred to the BDJ before they were flown to Manila escorted in Taliño himself.

BPPO director Senior Supt. Felipe Natividad also explained that since they considered Kiram as high profile they opted to transfer him in BDJ for safety purposes.

Natividad explained that the transfer was done at 2 a.m. because it was a standard operating procedure (SOP) of the police that if the investigation and interrogation of high risk person has been completed, the person should be immediately transferred to a secured place.

Natividad said a thorough interrogation took over a day in order for the police to get a much information as they could from Kiram, in the light of the ongoing operation to capture the two other remaining Abu Sayyaf members still hiding somewhere in Bohol.

Read Next
AFP: Slain suspect could have helped gather info about Abu Sayyaf

TAGS: IT, legitimate, operation, Taliño, was