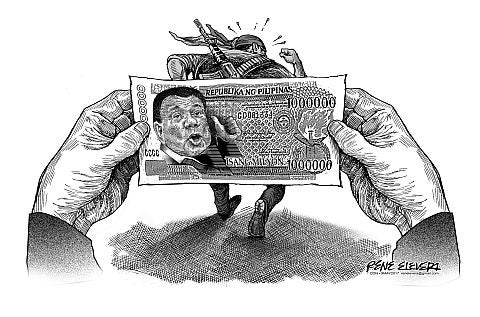 First off, we have to presume that President Rodrigo Duterte’s cash reward of P1 million for information leading to the capture of the Abu Sayyaf bandits that holed up in Bohol province was taxpayers’ money and not his own in order to put into perspective the controversy surrounding the miniscule P450,000 given to the motorela driver informant.

If it were the President’s own money, then it would be conveniently used as an excuse by the police and military for appropriating a larger chunk of the cash reward for themselves.

But though the President may be rich, it remains to be seen if the cash reward offered for information on the bandit group’s whereabouts did come from his pockets, his office’s intelligence fund (which is, even if not subject to state auditing, still paid for by the taxpayers), or from the national treasury itself.

Otherwise, the motorela driver, who was instrumental in leading the military and police to that fateful encounter that decimated the ranks of the Abu Sayyaf bandits and sent them running to the caves and hills for safety, should have received at least P1 million as the President promised for his efforts.

The President actually promised P1 million for every Abu Sayyaf bandit, and that’s only for information leading to their capture, not actual field participation. All the public is asking in this case is transparency on the issue.

And we have to take note of the fact that were it not for the vigilant residents of Inabanga town, Bohol province, the police and military would have been blind to the presence of the bandits who sneaked in via the sea to set up camp there.

There are persistent reports on social media that the military supposedly claimed a large portion of the cash reward money, reasoning that they also gathered intelligence that led to the armed encounter that killed several bandits.

If by “gathered intelligence” they meant they were able to uncover the plot to rescue the Abu Sayyaf bandits led by Supt. Maria Christina Nobleza and her alleged Abu Sayyaf husband/lover, then that’s a different story altogether.

This issue may be of little consequence to those resigned to the fact that there will always be corruption in the granting of reward for informants, but it’s still a big deal to those who risked their lives to deliver said information.

For them, they are assured of protection which is a given as well as cash rewards. And the police, military and local officials should not use the alibi that reporting the presence of bandits and other terrorists is a civic duty of every Filipino who should not expect renumeration of any kind.

If that’s the case, then the soldiers and police officers who received the bulk of the cash reward offered by the President should not partake of the money since they were also doing their job as mandated by the government and the people.

Read Next
Lopez and her CA rejection