Preserve trees at all cost: Groups to BRT proponents 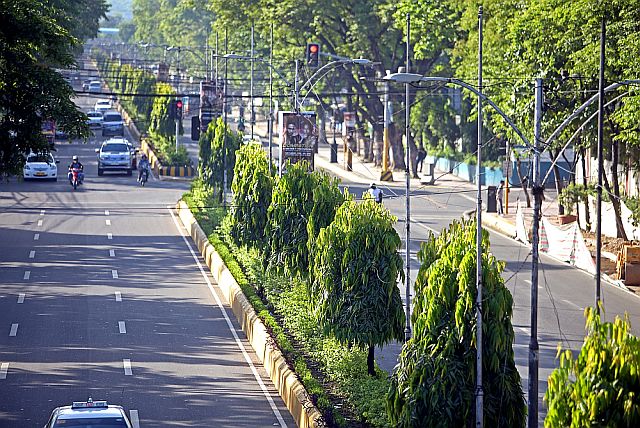 As Cebu City prepares for the Bus Rapid Transit (BRT) system, Indian trees such as these found on the center island of Osmeña Boulevard will likely be removed to give way for a road widening project later this year.
CDN FILE PHOTO

FR. Robert Reyes, the activist priest known for his environmental crusades and unconventional approach to social justice, is taking up a new cause: save Cebu City’s centuries-old trees from the up and coming, Bus Rapid Transit (BRT) project.

Also known as the “running priest,” Fr. Reyes sought the help of the Office of the Ombudsman for the Environment yesterday to ask what could be done to save the hundreds of trees which will be affected by the BRT route.

“I have not filed complaint (yet) but I’m here to seek advice on what to do about saving the trees in Cebu City,” Fr. Reyes said in a call to Cebu Daily News.

The priest’s visit to the Ombudsman coincided with a consultation held in Cebu yesterday which tackled the project and its environmental costs.

The Cebu City government represented by environmental consultant and former Cebu City councilor Nida Cabrera, assured civic organizations that City Hall will exhaust all measures to save as many trees as they can.

All centuries-old trees, she said, will be accommodated in the project design.

BRT Project Implementation Unit (PIU) head Rafael Yap also assured that the centuries-old trees along Osmeña Boulevard will not be removed and will be integrated into the BRT design.

“The road in Osmeña Boulevard is already wide including its sidewalk. There are heritage trees there. We included them in the inventory but as much as possible, these will not be affected based on the engineering design,” Yap said.

Based on updated data from the Cebu City Environment and Natural Resources Office (CCENRO), a total of 2,182 trees will be affected by the BRT project (earlier CCENRO reports cited 2,166 trees).

Cabrera reported that of the number, 1,985 will be earthballed or relocated; while the remaining 197 – mostly ipil-ipil, gmelina and mahogany trees which have become too big to be earthballed – will have to be cut down.

Some of the trees identified for cutting also have diseases, Cabrera said.

Meanwhile, flowering trees like banaba, fire, and Thailand shower trees will be planted on the sidewalk of the BRT corridor as ornaments, she said.

A DENR memorandum issued in November 2009 enumerates guidelines and procedures on the planting, maintenance and removal of trees in urban areas and in areas affected by government infrastructure projects.

Based on the guidelines, a grown tree measuring 15 centimeters and below may be earthballed if they are found to be healthy, its immediate environment or surrounding is free from any structures or impediments to support digging and moving operations, and a suitable and available site is properly identified by DENR with a guaranteed continuous growth and survival of the tree.

Cabrera assured that the city will find ways to earthball majority of the trees, including an old narra tree near the Cebu Provincial Capitol building which has grown to more than 100 centimeters in diameter.

“Among the city’s commitments is transplanting the affected trees to suitable sites, a procedure already practiced by the Parks and Playground Commission and the City Agriculture Department,” Cabrera said in her presentation.

Told about Cabrera’s assurance, Fr. Reyes lamented that earthballing is not a guarantee that the affected trees will survive.

“It has a lesser chance to survive because their roots are sensitive just like mahogany trees,” said Fr. Reyes, adding that while the law on the protection of trees remains vague and weak, the moral, spiritual, cultural and social value of trees could not be quantified nor ignored.

“While we can somehow calculate and estimate the material and biological value of trees, the other non-material value of trees makes them precious and inestimable in value so that any attempt to harm and worst kill them should be considered criminal,” Fr. Reyes said.

“In this light what are trees but cheap collateral damage hindrances to so called development,” he added.

During the consultation, Philippine Earth Justice Center (PEJC) co-founder and lawyer Liza Osorio appealed that all trees falling within the BRT route should not be cut as much as possible.

“Our position is no to cutting the trees. It is not allowed by our laws. These trees must be preserved at all costs. Nature is the source of law, not a resource. It should have the last say,” she said.

Another public hearing has been set at 9 a.m. today at the Rizal Public Library.