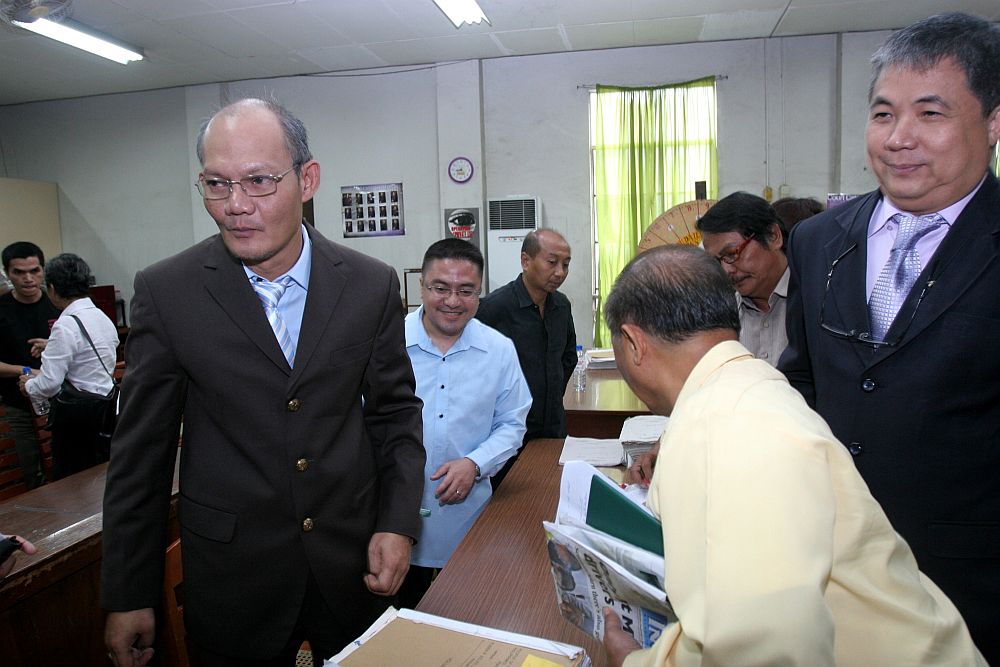 Former Dinagat Islands Rep. Ruben Ecleo Jr. (left) together with his lawyers Giovanni Mata (behind Ecleo) and Orlando Salatandre (right) makes a beeline for the door as one of his parricide hearings on Sept. 1, 2010 is done.
CDN FILE PHOTO

His two former lawyers — Orlando Salatandre Jr. and Giovanni Mata — must be stripped of their license to practice law, and the Supreme Court shall reopen the parricide case against him.

These were the conditions echoed by Senior Insp. Atilano Fabella, a retired policeman and member of the Philippine Benevolent Missionaries Association (PBMA) in a press conference at the Westown Lagoon in Mandaue City on Wednesday.

(He is just in the Philippines, and he will face whatever happens as long as his two lawyers will be disbarred and his case reopened),” said Fabella, who was accompanied by about 30 PBMA members.

Fabella did not elaborate on Ecleo’s whereabouts, saying he is only communicating with the fugitive’s 32-year-old son, Ruben Madron Ecleo I.
But Fabella and the PBMA won’t likely get what they wish for.

The Integrated Bar of the Philippines (IBP) has dismissed all the three disbarment cases Fabella filed against Salatandre and Mata for lack of merit.

In one case, the IBP considered Fabella a “fanatic member” of PBMA and a “law graduate who has not passed the Bar exams, the reason why he prosecuted the complaint by himself.”

Fabella has filed motions for reconsideration to contest the IBP’s ruling.

In 2014, he filed disbarment complaints against Salatandre and Mata for allegedly mishandling the case which led to the conviction of Ecleo.

He said Salatandre and Mata did not do their best to question the identity of the cadaver believed to be Ecleo’s wife, Alona, a fourth-year medical student, who the accused allegedly strangled inside their home at Sitio Banawa, Barangay Guadalupe, Cebu City on Jan. 5, 2002.

Three days later, a woman’s body was found inside a black garbage bag dumped in a ravine in Dalaguete town, southern Cebu.

Fabella said Salatandre and Mata reportedly got P250,000 from the Ecleo family as fee for every court appearance during the first five years, and P150,000 every hearing in the succeeding five years.

Apart from the lawyers’ fee, Fabella said Salatandre and Mata also collected P26 million from PBMA members while making a promise that the PBMA supreme master will be cleared of the charges.

Sought for comment, Salatandre denied Fabella’s and other PBMA members’ allegations against him
He said that he did his best so that Ecleo would be acquitted.

“Yes, the dead body was never proven to be Alona.

We presented complete evidence, but the judge just did not appreciate them,” he told Cebu Daily News in a phone interview.

Salatandre, who handled Ecleo’s case for 10 years, said he simply performed what was expected of him as a lawyer and that he meant business in every case he handled.

He also denied the allegations of having received P250,000 court appearance fee, and P26 million from PBMA members.

Read Next
2 fishermen drown in Cebu