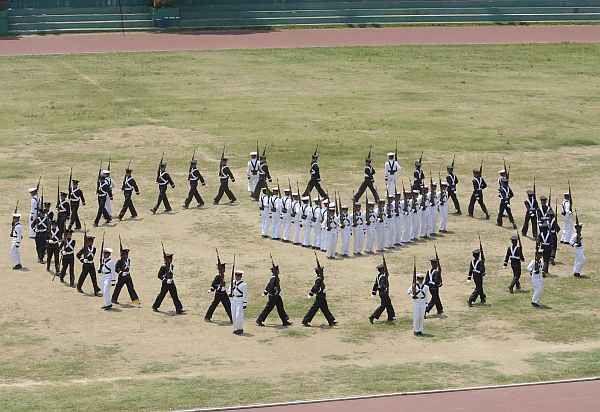 The Philippine Military Academy’s Mabalasik Class of 2019 performs some parade maneuvers, including one that forms the shape of a heart, during a visit to Cebu City on May 20, 2017.
CDN Photos/Christian Maningo

Aguilar took time to ask young Cebuanos to join the military and help in protecting the country and its citizens from internal and external threats.

“We are inviting all the young people, the brightest, the fittest and the best who are qualified to join PMA and apply for the exam so that in the future they can serve the country,” Aguilar said.

The PMA Mabalasik class of 2019 is in Cebu City as their last stop for their Southern Cruise.

They also went to Palawan, Zamboanga and Davao City to conduct recruitment and invite youths to take the exam.

The Philippine Army alone is recruiting nearly 14,000 troops this year to fill-up various Army units across the country.

Of the 13,910 additional Army personnel — 349 officers are needed; 8,892 will be enlisted personnel; 1,069 are to be soldiers for the newly organized 54th Engineering Brigade; and 3,600 soldiers will replace retiring personnel.

The Army chief said the additional engineering brigade is meant to address developmental projects like roads and school buildings.