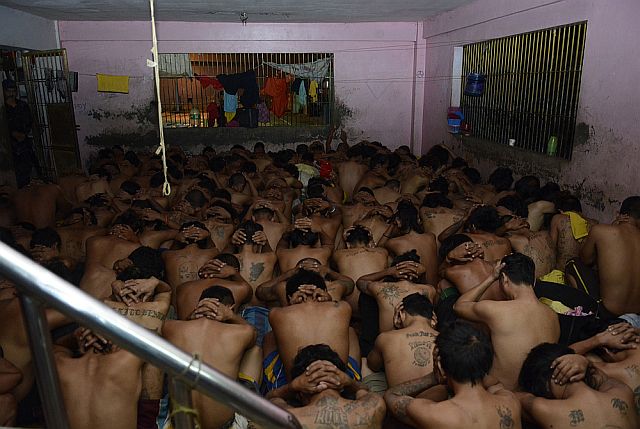 Naked. This is the kind of strip search that has alarmed human rights advocates. This search, done during a Greyhound operation in August last year at the Cebu City Jail, preceded last February’s strip search at the Cebu Provincial Detention and Rehabilitation Center that triggered a congressional inquiry initiated by House Deputy Speaker Gwendolyn Garcia.
CDN FILE PHOTO

A congressional inquiry will not scare drug enforcers into halting the strip searches in jails.

The Philippine Drug Enforcement Agency in Central Visayas (PDEA-7) will continue to implement the strip search during Greyhound operations in jail facilities in the region even if this has been a subject of stern criticisms from human right groups that led to a congressional inquiry initiated by Cebu third district Rep. Gwendolyn Garcia.

PDEA-7 director Yogi Felimon Ruiz, who appeared in the congressional inquiry held in the Batasang Pambansa in Quezon City yesterday, told Cebu Daily News that he believed they had made their position clear that there was nothing illegal with requiring inmates to remove all articles of clothing during surprise inspections.

These surprise inspections, called Greyhound operations, are meant to catch all prisoners by surprise as authorities search all their possible hiding places, including the inmates’ bodies and private parts, of contraband, particularly drugs and easy to conceal weapons.

The strip search became a cause for contention between law enforcers and human rights advocates after photos of naked prisoners of the Cebu Provincial Detention and Rehabilitation Center (CPDRC) who were subjected to the Greyhound operation were released by jail authorities and printed in Cebu news dailies and circulated online last February.

Garcia, Cebu’s governor from 2004 to 2013, find the strip search offensive and called for a congressional inquiry last March.

Garcia, in a privilege speech, was particularly critical of Cebu Gov. Hilario Davide III whom she accused of failing to clean the provincial jail of illegal drugs and for ensuring the rights of the inmates.

The congresswoman said she believed the illegal drug trade inside the CPDRC continues to flourish as shown by the contraband seized by agents of the PDEA during the surprise inspection.

Ruiz, who had earlier defended Davide by saying it was him who ordered the strip search and not the governor, yesterday stressed that requiring prisoners to strip naked is not only intended for the safety of the prisoners but also of law enforcers who are conducting the search, as it will ensure that the inmates are not concealing any weapon or prohibited items in their bodies or clothes.

(We will require the prisoners to strip. It is part of our standard operating procedures),” Ruiz said.

(There are many inmates inside the jail. We don’t know what they will do to us during an operation.)

Ruiz, however, said he understood the need to ensure that the prisoners’ dignity will be protected. Thus, he said, they will just refrain from taking pictures of the naked inmates during the Greyhound operations.

Should taking photos becomes necessary as part of the documentation process, these photos will not be released for media consumption, he added.

The House of Representatives’ justice subcommittee on correctional reforms conducted the inquiry following the controversial Greyhound operation at the CPDRC on Feb. 18, 2017.

Garcia, a political enemy of Davide, immediately lashed at the governor, which has supervision over the provincial jail.

Garcia echoed the sentiment of human right groups that the strip search was “cruel and inhumane.”

“Who should answer for this? Who should be accountable? The government officials or the employees?” Garcia then asked.

Ruiz reiterated anew that the strip search was solely an action of PDEA. He said that no one ordered him about it.

But Ruiz told the congressional body yesterday that stripping the inmates is part of the SOP under the manual of both PDEA and Bureau of Jail Management and Penology (BJMP) for the safety of the raiding team.

The anti-illegal drug director said that Davide only asked him to conduct the Greyhound operation last February but it was him, not the governor, who ordered all the inmates to strip naked.

Ruiz likewise said that even before he assumed as regional director of PDEA-7 in July 2016, inmates had been required to strip during a Greyhound operations.

Moreover, he added, it was largely because the prisoners have been required to remove all their clothing that the raiding teams were able to uncover a large amount of cash and illegal drugs in a Greyhound operation in August that year.

“When we conducted simultaneous raid on CPDRC and (the) Cebu City Jail last August 2016, we were able P4.6 million worth of cash and illegal drugs. I would like to point out that all prisoners were made to strip that time,” Ruiz said.

The raiding team also confiscated a big number of bladed weapons during the same operation, he noted.

Not one instance during this operation that a prisoner was mistreated, he said.

“There was no inhumane and cruel or degrading treatment of prisoners when we conducted Greyhound operations,” Ruiz said.

Both the August 2016 and February 2017 Greyhound operations were spearheaded by PDEA-7 with the help of Philippine National Police (PNP) in the region.

Chief Supt. Noli Taliño, Police Regional Office director in Central Visayas , who was also invited in the inquiry, said that based on the report submitted by the provincial police, there was no indication of degrading treatment of the inmates.

Department of Interior and Local Government Central Visayas (DILG-7) Director Rene Burdeos, who was also summoned to the same inquiry, told the committee that his office conducted a fact finding investigation into last February’s Greyhound operation at CPDRC and found no sign that PDEA-7 mistreated the prisoners.

Burdeos agreed that the strip search was justified to eliminate a possible source of threat to the raiding team, or to the prisoners who could be suspected of concealing drugs or weapons.

Read Next
How to attract, keep, develop right talents in one’s company