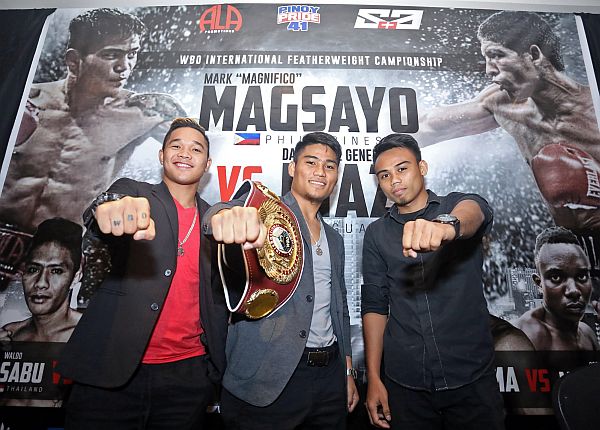 Boholano knockout artist Mark “Magnifico” Magsayo needs to prove that he deserves to be in the main event of Pinoy Pride 41.

And the only way to do that is beat former world title challenger Daniel “El General” Diaz of Nicaragua on July 8 at the ic3 Convention Center in Cebu City.

Unbeaten in 16 fights with 12 knockouts, the 21-year old Tagbilaran City, Bohol native is touted to become the next world champion from the famed ALA Boxing Gym. And a decisive victory against the veteran 33-year old Diaz who totes a fearsome 47 knockout percentage, is a step closer to that goal.

The Nicaraguan boxer who fought and lost to Japanese Koki Kameda for the latter’s WBA world bantamweight title in 2011 has 23 wins with 15 knockouts, seven losses and two draws.

“I need to win this fight impressively to pull myself closer to a world title shot,” said Magsayo at yesterday’s official launching of PP41 at the Radisson Blu Hotel.

His trainer, Edmund Villamor said that Diaz is a dangerous foe who knows how to use his reach advantage, has knockout power and speed. That’s why they are training very hard.

At stake in this fight is Magsayo’s WBO International featherweight title which he won in 2015 by knocking out Chris Avalos of the United States here in Cebu.

If he wins over Diaz, Magsayo wants to fight the WBO world featherweight champion Oscar Valdez. “That’s my ultimate dream, to fight Valdez because we have the same style.”

Also in the card is former WBO Intercontinental super bantamweight champion “Prince” Albert Pagara (27-1, 18KOs) who is on the comeback trail following his lackluster performance last November at the Cebu Coliseum against African Raymond Commey.

Pagara who lost to Mexican Cesar Juarez in San Mateo, California last year, will face Indonesian Waldo Sabu (12-7,2KOs) for 10-rounds in the under card.