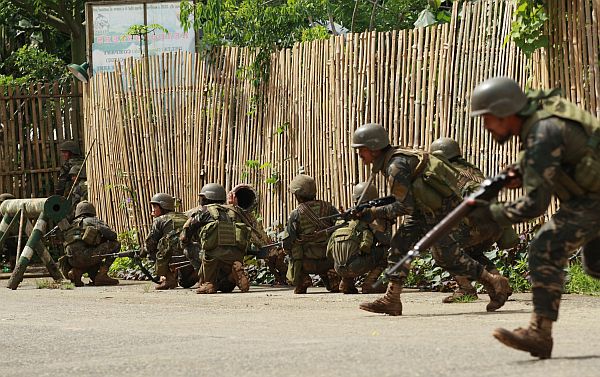 Soldiers take their positions as they prepare to hit members of ISIS-inspired militants in Marawi City during Wednesday’s military air and ground assault in the area. / INQUIRER PHOTO

Tourism players in Cebu and Bohol are already bracing for the impact of the declaration of martial law in Mindanao due to the ongoing gun battle between government troops and combined forces of the Maute and Abu Sayyaf groups in Marawi City in Lanao del Sur.

But the blow on the tourism sector would be greater if President Duterte would extend the martial rule in the Visayas.

Placing the Visayas under martial law would be like an affirmation that terror groups had indeed reached the region, said Cenelyn Manguilimotan, past president of the Hotels, Resorts, and Restaurants Association of Cebu (HRRAC).

“I’m really praying that it (Visayas under martial law) will not happen. It will have a great impact in tourism. Declaring martial law in Visayas is like saying that the bad elements infiltrated Visayas; thus, there is a threat,” she said in a phone interview.

Manguilimotan, current general manager of the Cebu Parklane International Hotel, said HRRAC members suffered from several cancellations when at least 10 members of the Abu Sayyaf Group (ASG) attempted to set up a base in Inabanga town in Bohol on April 10.

The members of the bandit group were later killed in separate operations in the different towns in the province that lasted for over a month.

She said the businesses in the tourism sector are still trying to recover from the incident.

Just as the tourism industry in Cebu and Bohol was about to recover, the Marawi siege occurred, prompting the President to put the entire Mindanao under martial law for 60 days.

Some resorts are anticipating cancellations from guests within the week — a normal reaction when news reports about peace and order come out.

“(There is fear) that since martial law has been declared in Mindanao, some elements may also move north to escape the heat in Mindanao. With all the photos and videos posted on social media, tourist arrivals will definitely be affected,” said Be Resorts Area Marketing Communications Manager Ronalaine Fernandez-Sato.

Fernandez-Sato, who hails from Mindanao, said her whole clan is in Lanao del Norte and Lanao del Sur and some of her relatives are still trapped in Marawi.

“We can only do so much, but we also hear our guests out. If they don’t feel comfortable coming to the Philippines, then we respect that. But instead of cancellations, we offer the alternative to rebook,” she said.

Economist and University of San Carlos professor Fernando “Perry” Fajardo said tourism players cannot anymore use the “isolated case” excuse to assure tourists that terrorist threats in the country is not serious.

Fajardo said the 2016 Davao City bombing, the ASG kidnapping attempt in Bohol, the recent explosions in Quiapo and the Marawi siege create a series of unfortunate events unfavorable to the tourism performance of the Philippines.

“Tourism will greatly be impacted downward. Watch out what’s going to happen in two to three weeks as we hear of cancellations from tourists. That will affect hotel performance,” said Fajardo.

“We already see it last month. What happened in Bohol affected Cebu. So what’s happening in Marawi is going to affect Cebu and Bohol,” said Fajardo.

Fajardo, however, said that terrorists will not be able to penetrate Cebu or Metro Manila and will be easily neutralized just like what happened in Bohol.

“I am not worried about them coming here (Cebu). They will not survive here because they don’t know this territory unlike when they are in Mindanao,” he said.

Former Department of Tourism Central Visayas (DOT-7) director Patria Aurora “Dawnie” Roa expressed her frustration in the current turn of events because of its negative impact on tourism.

“(The impact) is negative. The Japanese tourists are very sensitive. When they hear news that terrorist groups are doing something, they will immediately cancel even when the situation happens in Sulu or Basilan, which are not even destinations,” said Roa.

Roa, who spent 17 years as DOT-7 regional director and 15 years in the board of Mactan-Cebu International Airport, said situations like this will definitely discourage tourists from coming to the Philippines.

In an economic briefing on Thursday to update business leaders on investment prospects in Cebu, the discussion veered to terrorism threats and its impact to the Philippine economy when Mandaue Chamber of Commerce and Industry (MCCI) president Glenn Soco asked about the country’s economic health to sustain growth when faced with challenges.

Joselito Basilio, acting deputy director of economic research of the Bangko Sentral ng Pilipinas, said terrorist threats are part of the external shocks that have an impact on the growth of the economy.

Based on previous experiences with news on Brexit (Britain’s exit from the European Union) and US President Trump’s pronouncement of his protectionism policy, Basilio said the financial markets seemed to ride on the wave of these “noises” but things eventually settled down.

“What we hope is that this (terrorist threats) will just be temporary. We are concerned about the performance of the financial sector. Our best hope is that this noise will be short term so that this will not prolong and will not creep into the fundamental decisions of investors and businesses,” said Basilio.

Tourist destination Shangri-La’s Mactan Island Resort and Spa in Lapu-Lapu City, Cebu, banks on the same hope as they emphasized that operations remain normal and strong security measures are in place.

“We want to assure guests and business partners that the safety and security of our guests and colleagues are our highest priority. We will continue to monitor the situation closely and maintain close contact with the local authorities,” said director of sales and marketing Myra Regner.

Fajardo said the declaration of martial law in Mindanao was “unnecessary” as it only created “negative news.”

“There is definitely a need for some form of military action in Marawi, but it was unnecessary to declare martial law,” said Fajardo.

Read Next
Ramadan begins on May 27