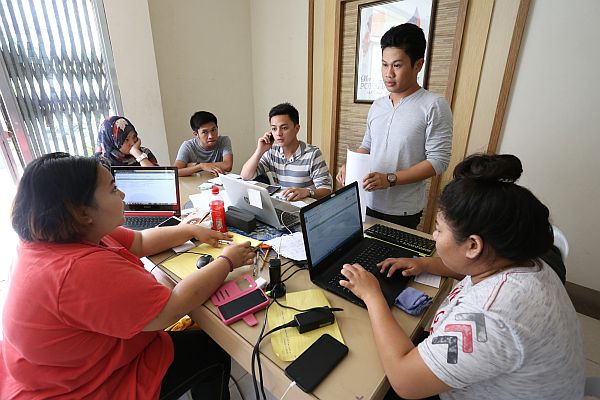 Kind-hearted individuals may drop their donations for Marawi siege victims at the Tabang Sibilyan Visayas Operations Center at the Cebu Caritas building beside the Cebu Metropolitan Cathedral.
CDN PHOTO/JUNJIE MENDOZA

When she learned that a relief operation was established at the Cebu Caritas building for the residents in Marawi City who were displaced by the ongoing battle between the government troops and the Maute group, 58-year old Gloria Poloyapoy decided to drop off some help at past 11 a.m. yesterday.

“Dili lalim ang ilang gibati nga kasakit karon sa nahitabo didto (What they are going through right now is not easy),” she said, adding she was teary-eyed when she first learned about the incident in Marawi.

Poloyapoy said Mindanao is also close to her heart since she spent three years working at a coffee plantation in Malaybalay, Bukidnon.

As of yesterday, there were 12 persons who dropped by the center to give their donations.

When Cebu Daily News visited the Tabang Sibilyan Visayas Operations Center at Cebu Caritas Building near the Cebu Metropolitan Cathedral yesterday, there were 21 volunteers composed of students and young professionals who answered domestic and international calls from people seeking to donate.

Since Thursday until yesterday morning, around 500 calls were received by the volunteers.

Some of the callers inquired about the status of their loved ones displaced by the ongoing conflict in Marawi. Luckily, most of the victims were located at evacuation sites.

Adiong encouraged more people to volunteer for their hotlines since they are operating 24 hours until Friday next week.

Read Next
DepEd Cebu City to accept transferees from Mindanao