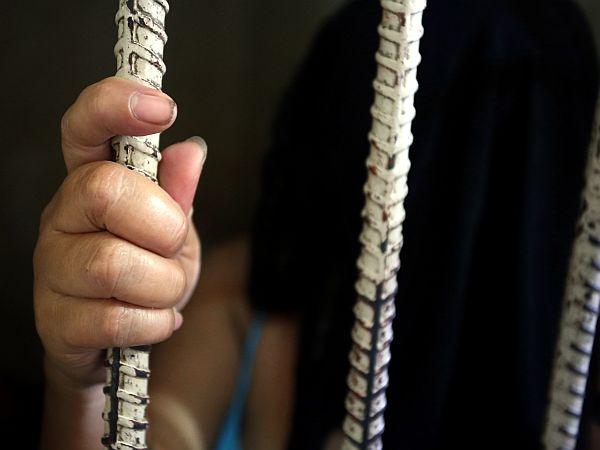 Her neighbors thought Rosalyn (not her real name) was only selling pastries online. Imagine their shock when
authorities arrested her on Saturday for allegedly exposing her 15-year-old daughter to
cyberpornography.
(CDN PHOTO/LITO TECSON)

Rosalyn (not her real name) was famous in Sitio Sampaguita, Barangay Opao in Mandaue City for operating a roadside sari-sari store and selling pastries online.

Her relatives and neighbors were caught by surprise when they learned that the 54-year-old mother of two daughters was arrested by authorities last Saturday for allegedly exposing her 15-year-old daughter to cyberpornography.

She said they never had an idea that Rosalyn was exploiting her daughter to do online sex shows for foreign customers.

While the law on human trafficking allows the media to identify the suspect, Cebu Daily News has withheld the name of the mother in this case to protect the identity of her daughter.

A neighbor said Rosalyn, her husband and two daughters have been living in a shanty located about 100 meters from the main road in Barangay Opao for several years now.

But they spent most of their time on their roadside sari-sari store since their house didn’t have any power connection after failing to pay the bills five years ago.

“Dugay naman na siya nagtinda-tinda diri. Nahibong na lang mi nga gidakop siya. Sa among pagkahibaw, dili na siya ingon ana (She has been selling goods here for a long time. We were just surprised when she was arrested. All we know was she did not engage in cyberpornography),” she said.

“Detection is really a challenge because even the social structure of the family, the family members support the activity of the mother or the daughter or the son,” he said in a press conference on Monday.

Rosalyn has been locked up at the Police Station 1 in Mandaue City following the arrest made by the Anti-Cybercrime Group in Central Visayas (ACG-7) and the International Justice Mission (IJM).

She made her 15-year-old daughter do a live sex show online inside their home in Barangay Opao to an Australian policeman who posed as an online client.

Seized inside the suspect’s house were several smartphones and cell phones which would be subjected to digital forensic examination.

Rosalyn would be charged with violations of the Anti-Trafficking in Persons Act, or the Anti-Child Pornography Act in relation to the Cybercrime Prevention Act, and the Special Protection of Children Against Abuse, Exploitation and Discrimination Act.

If found guilty by the court, Rosalyn faces life imprisonment and a fine of P2 million to P5 million.

Since the victim is her 15-year-old daughter, the offense falls under qualified trafficking — a non-bailable offense.

Her daughter is now under the custody of the Department of Social Welfare and Development in Central Visayas.

Rosalyn’s was the first case of Osec recorded in Mandaue City. But in this particular case, the mother has been doing this to her daughter for five or six years already.

Fortuna said cyberpornography could still be addressed by government officials.

One way to do so, he said, is to seek the help of third parties — teachers and friends, among others.

“Most of the victims don’t want to continue the same kind of abuse. But they could not report to anyone easily because they cannot find someone they can easily trust,” he said.

The city will be strengthening ties with officials from both public and private schools in the city in order to help report possible cases of Osec among their students.

Fortuna said the communities will also play a vital role in detecting possible cases of Osec.

“If you think there is something (wrong) going on, you can easily tell what’s happening in the family because of a sudden lifestyle change. They start buying iPhones. It’s a very lucrative profession or occupation,” he said.

Another step being considered by Mandaue City is to pass an ordinance similar to that of Cordova town, which requires money remittance centers in the city to submit reports to the police or the city government if there are suspicious transactions between a sender from abroad and a receiver in the city.

This may include several money remittance transactions between the sender and receiver within one day, or huge amounts of money being remitted.

“One of the indicators of online child sexual pornography is the remittances from other countries to the supplier of online sex. Right now, we have

agreed to come up with a legislation to strengthen our teeth in monitoring these activities so we can detect both the source and the supplier,” he said.
In a press statement, the IJM said the victim had long wanted her mother to be arrested.

“When interviewed after rescue, the victim said she had been praying that the abuse would stop,” said Evelyn Pingul, IJM Communications, Mobilization and Advocacy director.

She said the ACG-7 received a referral from the Australian Federal Police that the suspect had been repeatedly sexually exploiting her two daughters online by sending sexually explicit images to an Australian in exchange for money sent by the foreigner through a money transfer agency.

Evidence gathered by the Queensland Police in Australia showed that Rosalyn began sending sexually explicit images of her youngest daughter when the latter was only 10 years old.

One of Rosalyn’s clients, Stephen James Sheriff, was arrested in Australia and was convicted for soliciting and accessing child exploitative images.

In an interview, Rosalyn admitted that she knew Sheriff, claiming that the Australian convict was the boyfriend of her older daughter, who is 25 years old.

“Nagsuporta man na siya sa akong anak nga iyaha pud nga uyab. Ang among gipadala niya mga pictures man kon naa may okasyon, dili kanang mga butanga (Sheriff has been financially supporting my daughter, who is his girlfriend. We sent photographs to him when there were occasions in our family, but not lewd photos),” she told CDN.

Rosalyn insisted that the money was a gift, not payment.

Rosalyn said she has not heard from Sheriff since a year ago.

Read Next
Fiancé, father call for justice for accountant’s murder